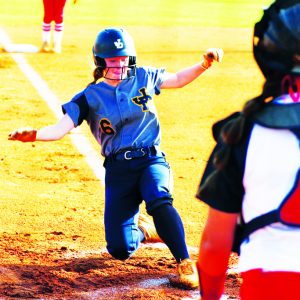 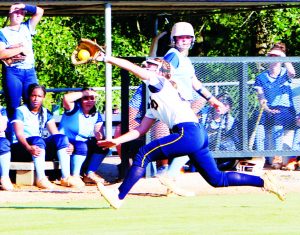 Jaci Underwood makes a catch down the third base line 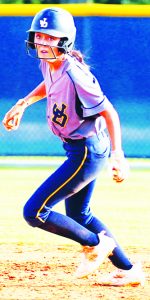 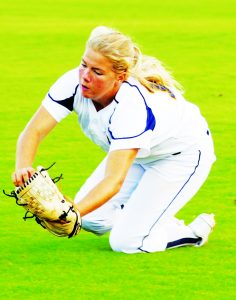 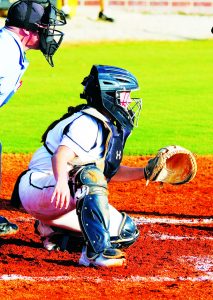 Kelsey Parlor pitched a no-hitter and the Lady Jackets bats had 13 hits as Jeff Davis rolled to a 12-0, 4-inning victory over Toombs County last Thursday in Lyons.
Monday, the Lady Jackets improved their record to 8-1 with a 4-2 win over Coffee County in Douglas.
Parlor almost pitched a perfect game in Lyons as she walked the first batter she faced and then retired the next 12 batters in order as the first inning walk was the only baserunner the Lady Bulldogs had for the game.
Jeff Davis got started in a hurry with a 9-run first inning, coming on six hits, two Toombs errors and two walks. JD led 6-0 before Toombs got anyone out in the inning.
Jenna Miles, Ella Wood, Analese Poole, Alicia Lilliott, Bentlee Metts and Jaci Underwood each had a single in the inning.
The Lady Jackets added two more runs in the second inning as Lilliott got a 1-out double, went to third on a Parlor single and scored on Metts’ ground out as pinch runner Addison Brewer advanced to second. Laisa Hernandez then singled to right scoring Brewer to make it 11-0.
Jeff Davis’ final run came in the third as Underwood and Poole started things with consecutive singles and both moved up a base as Maeleigh Burns grounded out to second. Underwood came home as Lilliott grounded out to first.
Miles had the hot bat for the Lady Jackets as she went 3-for-3 at the plate with a trio of singles. Lilliott singled and doubled and drove in three runs, Underwood had a pair of singles and an RBI, Poole singled twice, Metts and Hernandez both had a single and two RBIs, and Wood and Parlor each had a single and an RBI. Miles stole three bases and Metts and Wood had one swipe each.
For the fourth straight game, the Lady Jackets played without an error.
Parlor’s no-hitter came with the lone walk and four strikeouts.
In the Coffee game, the Lady Jackets got all their runs in the fourth inning.
Poole opened the inning with a walk and, an out later, Lilliott doubled to push Poole to third. Kalleigh Sellers then hit a pop fly to left which was dropped, as Poole scored and Lilliott went to third and Sellers made it to second. With two outs, Hernandez plated Lilliott with a bunt single as Sellers advanced to third. Miles followed with a 2-run double to give JD its four runs.
After the Lady Trojans got their second run in the bottom of the fourth, Parlor retired nine of the next 10 batters, five by strikeout to preserve the 2-run victory.
Jeff Davis managed only five runs, three of which came in the fourth. Miles’ 2-run double was the big hit of the game. Lillian doubled, Hernandez had a bunt single and an RBI, and Wood and Underwood both singled.
Parlor pitched the entire game, giving up one earned run on two hits, walking three and striking out eight.
The game ended the Lady Jackets’ 4-game streak of playing without an error as the fourth inning Coffee run came on an error.
Score by innings:
JDHS 9 2 1 0 -12
TCHS 0 0 0 0 – 0