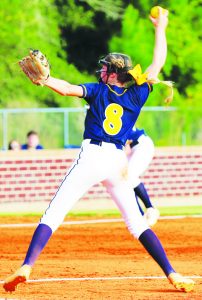 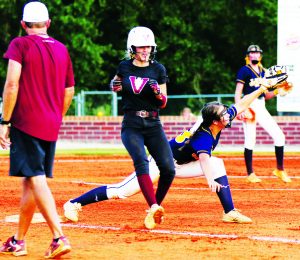 Jeff Davis High’s softball team improved to 6-1 with a 9-1 win over Long County Wednesday, a big 4-1 victory over Vidalia Thursday and a 6-0 win over Telfair County Monday. All three games were played in Hazlehurst.
The Lady Jackets spotted Long County to a 1-0 first inning lead and then blew the visitors away, winning 9-1 in six innings.
JD tied the game 1-1 in the bottom of the first on Annalese Poole’s run-scoring triple.
They took the lead for good with a 2-run third inning. Bentlee Metts opened the third with a triple and scored as Jenna Miles reached on an error. Miles scored later on a Jaci Underwood fielder’s choice grounder to make it 3-1.
A 4-run fourth sealed the Blue Tide’s fate.
Alicia Lilliott reached on an error to start the inning. Laisha Hernandez came on to run for Lilliott and quickly stole second. Peyton Thigpen followed with a one-out double to score Hernandez. With two outs, Miles doubled in a run and Ella Wood followed with another double to score Miles, making it 6-1. Underwood’s single plated Wood to up the tally to 7-1.
The Lady Jackets ended the game by the run rule in the bottom of the sixth as Metts singled, went to second on a wild pitch and scored as Wood was safe on an error. Underwood then doubled to center to push Wood across the plate and end the game.
Six of the Lady Jackets’ eight hits were for extra bases. Underwood had a double, a single and three RBI to lead the offense. Metts had a triple and a single, Miles and Wood both doubled and drove in two runs, Thigpen had a double and an RBI, and Poole tripled.
Kelsey Parlor was the winning pitcher. She threw 4 1/3 innings, giving up one run on three hits, walked one, hit two and struck out seven. Underwood pitched 1 2/3 innings, retiring all five batters she faced, one by strikeout.
The defense played without an error.
Thursday’s win over defending region champion Vidalia was a big one. The Lady Jackets got their four runs in the first two innings.
After Parlor retired the Lady Indians in order in the top of the first, Wood reached base with one out in the bottom of the inning. Poole singled Wood to second and Maeleigh Burns followed with a 2-out, run-scoring single.
In the bottom of the second, Parlor walked to lead off the inning and took second on Thigpen’s sacrifice bunt. Jacie Jones came on to run for Parlor and Metts singled to put Jones on third. Miles singled to score Jones and Metts took third on the throw. Miles stole second and Wood reached on a ground ball error, driving in both Metts and Miles to make it 4-0.
A walk and a double gave Vidalia their only run in the top of the third.
Jeff Davis threatened again in the sixth as Thigpen and Metts got back-to-back, 1-out singles but a pair of fielder’s choices ended the inning.
Burns led the Lady Jackets at the plate with a pair of singles and an RBI. Metts had two singles, Mile had a single and an RBI, Poole and Thigpen both singled and Wood drove in two runs. Thigpen added a sacrifice bunt.
Parlor went the distance on the mound. She gave up one run on four hits, walked one and fanned five.
The defense again played without an error.
Against Telfair County, Parlor pitched a 1-hit shutout. She issued only one free pass — a hit batter — and fanned nine Lady Trojans in her best outing of the season.
The Lady Jackets’ only senior, Lilliott got things started in the second inning with her career first homer, blasting a liner over the left center field fence. It was a 10-pitch at bat for Lilliott as she fouled off six pitches, three with a 3-2 count, before getting her round-tripper. As it turned out, that was all the scoring the Lady Jackets needed.
They added three more in the third. Hernandez, Miles and Wood got consecutive 1-out singles. Wood’s hit drove in two runs, pushing the score to 3-0. With two outs, Poole doubled to left to score Wood, making it 4-0.
JD added single runs in the fifth and sixth. In the fifth, Wood’s sacrifice fly scored a run and in the sixth, singles by Burns and Lilliott and a walk to Parlor loaded the bases. Metts then grounded into a fielder’s choice to score pinch runner Jones.
Lilliott had a homer, a single and an RBI, and Wood had a single, a sacrifice and three RBI to lead the hitting. Poole had a double and an RBI, Miles, Burns and Hernandez each had a single, and Metts drove in a run.
For the third straight game, the Jeff Davis defense played without an error and, through seven games, there have committed only three errors.
Score by innings:
LCHS 1 0 0 0 0 0 -1
JDHS 1 0 2 4 0 2 -9