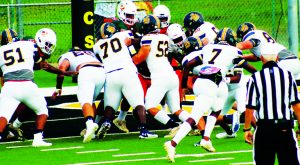 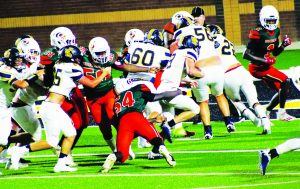 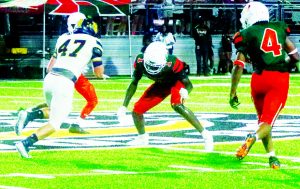 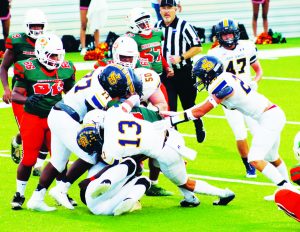 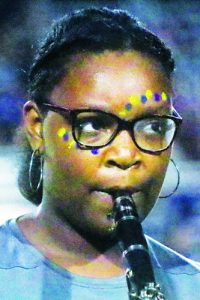 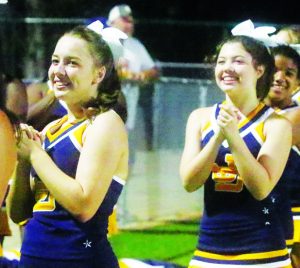 Friday night’s Jeff Davis-Rutland football game in Macon was a mismatch from the start as the Yellow Jackets rolled to a 41-0 victory, and the game was even more lopsided than the score indicated.
Senior C.J. Parker, normally a wide receiver, had a field day running the football, senior wide receiver Michael Dotson scored three TDs — on two touchdown passes and a kickoff return, senior quarterback Tyson Alls scored one touchdown and threw for two more, and the rock-solid JD defense smothered the Hurricanes throughout the evening.
By kickoff time, COVID-related quarantines had sidelined 23 of the 71 players on the Jacket roster — almost a third of the team. But the Jackets are so deep the team didn’t miss a beat.
The Jackets’ first possession started at the Rutland 42 after the JD defense had backed up the Hurricanes forcing a punt from the end zone.
The first play was a 21-yd. run by Parker with blocking so effective no one laid a hand on him until he reached the 21 yard line. Two plays later Parker broke loose again this time with an elusive 14-yd. scamper to the two. Two plays later, Landon Roberson scored from the one. Angel Mendez added the P.A.T. and the Jackets were up-7-0.
The Canes realized quickly that trying to run on the Jeff Davis defense was fruitless so they went to the airways with some success, moving into Jacket territory. But on 4th down at the JD 25, no one managed to block defensive tackle Jacob Strom and he blew through to hit the Rutland runner in the backfield and Peyton Laney came in to finish him off and the Jackets took over on downs at the 30.
Roberson dashed for 14 yards, and on the next play a holding penalty nullified a 56-yd. scoring run by Parker. Two plays later, quarterback Alls rolled 58 yards on a keeper for a 13-0 JD lead. Mendez made it 14-0.
After Carter Mullis zipped through to flush the quarterback on a 3rd down play, Rutland was forced to punt again.
Early in the second quarter, Alls lofted a long pass to Dotson who made the catch at the Hurricane 31, slipped a tackle and trotted into the end zone for a 65-yd. score. Mendez booted the extra point to make it 21-0.
The Jackets’ next possession started at the Rutland 39 after a short punt. After Alls was sacked for a 3-yd. loss, Parker raced for 17 yards to the 25. Alls then connected with Dotson in the end zone and the Jackets’ lead grew to 27-0. A high snap thwarted the extra point attempt.
A fumble on a punt return kept the offense off the field for a series and, four plays later, Parker fielded a Rutland punt at the JD 6 and followed his blocking to race 94 yards for another score. But a penalty nullified the score and the Hurricanes were awarded another punt.
Two plays after the punt, another fumble gave Rutland the ball back and Head Coach Lance Helton called a time out and assembled his entire team for a talk. Helton told his charges they were beating themselves and ended the meeting with an emphatic “Stay focussed!”
On the Jackets’ next possession, Parker and Roberson both had big gainers but time ran out and JD went to the dressing room at halftime with a 27-0 lead.
Jeff Davis wasted no time scoring in the second half as Dotson returned the kickoff for a score and Mendez kicked the extra point and the lead grew to 34-0.
After an exchange of possessions, Rutland finally began to enjoy some offensive success but Miyon Conaway pounced on a fumble to end the drive.
Conaway recovered another fumble later in the game and Laney had a pass interception.
A running clock shortened the remainder of the game with the Jeff Davis second line players getting in lots of playing time. With Colby Beach in a quarterback, free safety Kade Harpe got in some time at running back and scored on a 7-yd. run to up the score to 41-0.
Score by quarters:
Jeff Davis 14 13 7 7 -41
Rutland 0 0 0 0 – 0