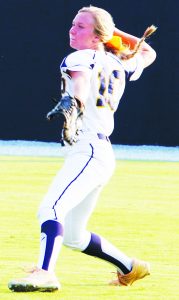 Payton Thigpen throws in the ball from right 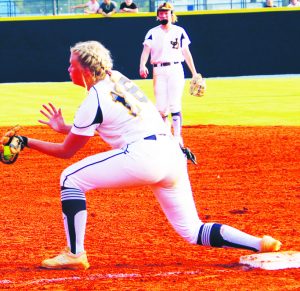 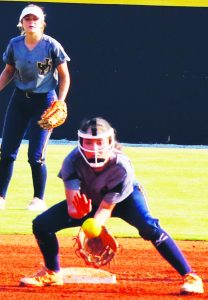 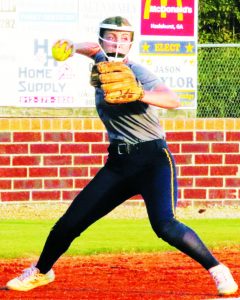 Jaci Underwood throws out a runner from third 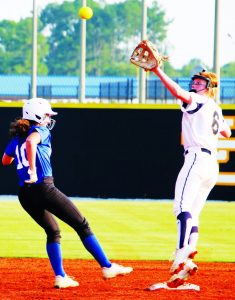 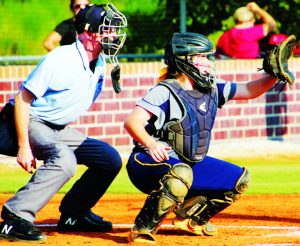 Kalleigh Sellers behind the plate

Jeff Davis High’s softball team split a pair of games against Class AAA teams last week in Hazlehurst as they fell to Pierce County 9-1 Tuesday in six innings and defeated Appling County 3-2 Thursday on a Kalleigh Sellers walk-off single.
Against Pierce the Lady Jackets took a 1-0 lead in the second inning with an unearned run as Payton Thigpen singled to drive home Sellers who had reached on an error and stole second.
But that was all the offense JD could muster as the Lady Bears rallied for the 9-1 victory.
Jenna Miles and Annalese Poole both doubled to lead the Jeff Davis hitting. Thigpen, Jaci Underwood and Bentlee Metts each singled and Thigpen drove in the only run.
Kelsey Parlor absorbed the loss. She went 3 1/3 innings, giving up four earned runs on eight hits, walking two and striking out two. Maeleigh Burns pitched 2 2/3 innings, giving up two runs on five hits, walking one and striking out two.
The Appling game was a nail biter as the visiting Lady Pirates led 2-1 entering the bottom of the sixth inning.
In the bottom of the sixth, Sellers walked, stole second and advanced to third on a fielder’s choice by Burns and Burns was safe at first putting runners on 1st and 3rd with no one out. The Lady Pirates intentionally walked Alicia Lilliott to load the bases and then Sellers was forced out at home on a grounder to second base. Kira Buford then came in to pinch run for Burns at third and, on the first pitch, came home on a catcher’s error to tie the game 2-2.
In the bottom of the seventh, Ella Wood led off with a double and advanced to third after tagging up on an Underwood fly to right. When Poole singled to the pitcher Wood was held up at third. Sellers then singled to score Wood for a walk-off, game-winning hit.
Jeff Davis’ first run came in the bottom of the first inning as two walks and a hit batter loaded the bases with no one out. A walk to Poole drove in the first run with the bases still loaded and no one out. After a strikeout, a line to center was caught for the second out and Wood was thrown out at home after tagging up at third.
Wood was 3-for-3 with a double to lead the winners at the plate. Poole and Sellers both had a single and an RBI.
Parlor threw a 4-hitter as both Appling runs were unearned. She gave up two walks, hit two and struck out seven.
The JD defense turned a double play. In the top of the first with a runner on first, the batter bunted to Parlor who threw to Burns at first for the first out and Burns threw to shortstop Miles at second as the lead runner tried to go to third. Miles then threw to Underwood at third to complete the double play.
Score by innings:
PCHS 0 0 2 5 1 1 -9
JDHS 0 1 0 0 0 0 -1