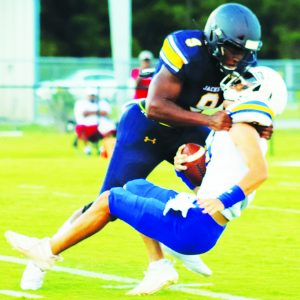 Miyon Connaway gets a quarterback sack 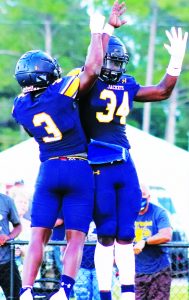 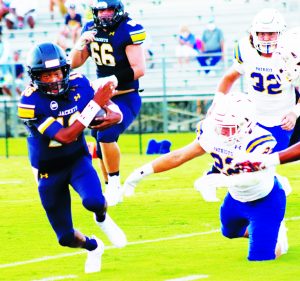 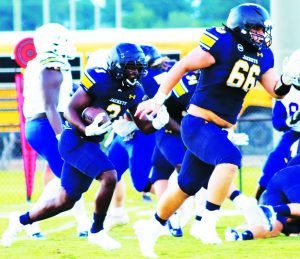 Jeff Davis High’s 2021 football team saw its first action of the season Friday night as the team hosted Wilcox County for a preseason scrimmage.
The first quarter was devoted to jayvee players from both teams.
With ninth grader Colby Beach at quarterback, the young Jackets took the opening kickoff and picked up a first down but the drive was ended with an interception. Wilcox’s young players also picked up a first down but on their second series had to punt the ball away.
On the first play after the change of possession, JD freshman Gavin Coleman darted through a big hole, eluded several tacklers and broke into the open racing 55 yards before being brought down from behind inside the Wilcox 20. The Jackets couldn’t score but the first quarter went to the young Jackets as they dominated play.
Then the varsities took over the field.
The Jackets quickly picked up a couple of first downs, the first on a nifty run by Kyrese Hunt and the second when quarterback Tyson Alls hit C.J. Parker on the left side and Parker zigzagged down the field dodging tacklers all the way to the end zone. The score was nullified by a downfield penalty but it was only a temporary obstacle. Two plays later, fullback Kiyon Dotson took the ball around the right side for a 37-yd. touchdown run. Angel Mendez kicked the extra point.
After an exchange of possessions, the Patriots got their first sustained drive, a 12-play possession that started at the Wilcox 21 and reached the Jeff Davis 36 before the JD defense stiffened. Miyon Connoway eluded a blocker and sacked the quarterback for a 9-yd. loss and Wilcox couldn’t move the chains.
On the second play of the second half, Wilcox dropped the football and the Jackets recovered at the Wilcox 18. Jeff Davis scored in three plays as Alls capped the drive with a 2-yd. keeper, sidestepping two tacklers on his way to the end zone. Mendez again added the P.A.T.
Wilcox put together a 7-play drive but then Landon Roberson rushed in from his rover position to rack the Patriot quarterback as he attempted to pass and Peyton Laney picked off the pass and raced 55 yards to paydirt. The extra point kick sailed to the left.
Four plays after the kickoff, an interception got the Jackets the ball back at the Wilcox 38. Two plays later, Laney raced 32 yards for the fourth Jacket TD.
The JD defense had another pass interception as Parker picked off a pass at the Wilcox 45 and returned the ball all the way to the end zone. But a pass interference penalty nullified the score.
Coach Lance Helton loaded the field with substitutes in the final quarter. Late in the game, Wilcox finally got on the board, going 75 yards in 10 plays to make it 27-6.
The Jackets got another first down on the second possession on a 23-yd. Laney run but an intentional grounding penalty thwarted the drive. and Kade Harpe had to punt the ball away.
With time almost gone, Duke Stone stepped in front of a pass for an interception and sped from the Jeff Davis 14 all the way to the Wilcox seven before being knocked out of bounds.
The Jackets then knelt on the ball to run out the remainder of the clock.