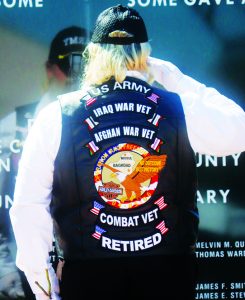 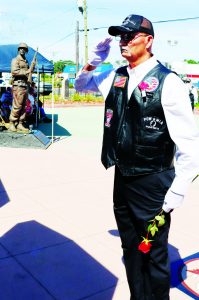 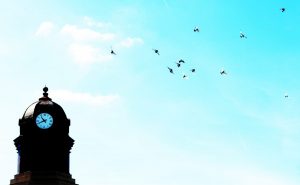 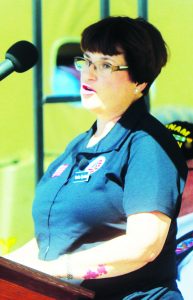 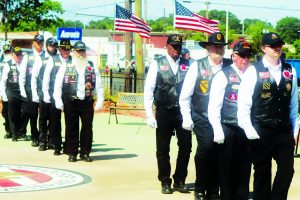 The Jeff Davis County Veterans Association will hold its annual Memorial Day ceremony May 31 at 10 a.m., at Veterans Square Park on South Tallahassee Street to honor those veterans who lost their lives in defense of America’s freedoms.
The keynote speaker is Kendra LaBarge Spadoni, a veteran of the U.S. Army and an active member of the Veterans Association.
Spadoni, born in Coronado, Calif., graduated from Hatboro Horsham High School in Hatboro, a small town north of Philadelphia, before going to college at Pennsylvania State University. After graduating from Penn State in 1979 with a Bachelor of Science in Microbiology, she joined the Army after being commissioned by her father, Commander William A. LaBarge, a 1956 graduate of the Naval Academy.
During Spadoni’s time in the army, with 12-1/2 years in active duty and 12-1/2 years in the Army Reserves, she served as a chemical officer. In the Reserves, she was an environmental protection specialist who was responsible for 39 Army Reserve centers in Pennsylvania. During her time in the Army, she traveled the world and was stationed in Germany twice, once at Kaiserslautern and another at Stuttgart, as well as Fort Hood in Texas.
Spadoni retired from the Army Reserves as a lieutenant colonel in December, 2004, after completing her last assignment of teaching U.S. Army Command and General Staff College to 13 Delaware National Guard majors, all of whom were promoted to lieutenant colonel with three of those promoted to full colonel. After leaving active duty, Spadoni moved back to Hatboro to be near her parents.
The year 2004 would continue to be memorable for her as she married her husband, Robert “Bob” Spadoni. They came to Hazlehurst from Athens, Ala., where Bob had lived since 1999 and she since 2004. In 2019, he came to Hazlehurst and began working at Plant Hatch, with his wife and their dogs following early the next year as soon as she finished with several volunteer projects in Alabama. She’s also a Master Gardener who has a special affinity for hostas, a pretty garden plant that has myriad varieties.
During the Memorial Day ceremony and remembrance, Spadoni will deliver her message, the Veterans Association will honor local veterans who lost their lives in combat, and other guests will present special music and events.
Chairs and benches will be available, but visitors are welcome to take their own. There is no charge.