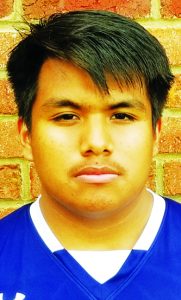 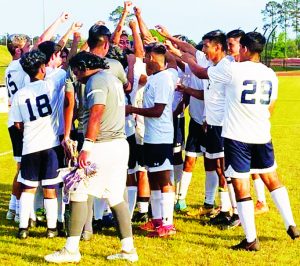 After a win against Cook County to end the regular soccer season, the Jackets were looking great and strong going into their playoff game against Jasper County. This was the first time the two teams had ever faced each other. It was Jasper’s first time in the playoffs so they were inspired and ready to dream big after a great season for them.
The Boy Jackets demonstrated throughout the season on being a talented and flexible team that did great things. One thing they stayed true to was the high intensity they played at no matter where. The Jackets traveled to Jasper with a mentality to win and it showed.
First half started with the Jackets having control of the ball. It took the Jackets up until the 6th minute to have their first shot which was off target. The Jackets were having a tough time getting shots on frame. Jasper had opportunities that the Jackets’ defense line contained easily.
The Jackets scored the first goal on a great play from Fernando Vega on the flank who assisted Justin Aguirre shooting towards the far post where the goalie had no chance of saving it in the 27th minute. The 1-0 lead was a small compared to what the Jackets had demonstrated in the first half.
The Jackets continued dominating the game and extended their lead, 2-0, in the 38th minut. Darian Cortez, who had scored a hattrick the game before, scored a strong hard shot against the keeper who was nowhere near saving it. The assist from Oscar “Catchpup” Marquez was splendid.
The half ended with the Jackets dominating and clearly being the better team on the field with a 2-0 lead.
The Jackets started on fire in the 2nd half as they extended their lead to 3-0 in the 43rd minute. A drop ball from the ref saw Pablo Tapia send a long ball to Justin Aguirre who settled the ball and tapped it to the other side of the keep.
The Jackets continued their dominance another 10 minutes and slowed their intensity. Jasper took advantage by creating more opportunities but did not endanger the Jacket net. Jasper was awarded a penalty kick after a terrible defensive mistake by the Jackets’ backline. Luckily, Jasper would shoot the ball wide and completely miss. This would be their last opportunity to get back into the game. The Jackets would put the last dagger into the hopes of Jasper making a comeback with a goal in the 64th minute from Julian Galvan.
The Jackets won a corner that played quick to Julian and he sent a cross in. The ball was slightly deflected but the goal was credited to Julian after a smart play. The Jackets ended the game playing well and containing Jasper’s attacks. The Jackets played well and ended the game in a well played and organized fashion.
The Jackets faced Thomasville last Thursday in Thomasville in the 2nd round and fell 5-0 to end their season.
Player of the Week was Oscar “Catchpup” Marquez- For the 2nd week in a row, Marquez showed determination and hard work to prove he is an asset to the team. He has been working hard to improve and make the team better. He played a great game in the first round of playoffs and had an assist for the 2nd goal of the night.