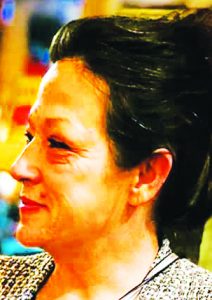 Our beloved mama, sister and friend was welcomed into the gates of Heaven April 24. We are heartbroken but we rejoice knowing that she is with family in the presence of our Heavenly Father.
A graveside service for Melissa “Lisa” Vaughn Manus was held May 1 at Little Rock Cemetery, Alamo. She loved God, her children, grandchildren, studying her bible and listening to music.
A native of Wheeler County, Ms. Manus was the daughter of the late Bobby Roberson and the late Eloise O’Connor Roberson Carter. She was passionate about her work at Goodwill Industries and had many close friends, including her former manager, Tiffany Overstreet. Ms. Manus was preceded in death by brothers, Brian Roberson and Terry Roberson.
Survivors include her children, Jodi Vaughn of Macon, Chelsea Vaughn of Birmingham, Ala., Alicia (James) Young of Blue Ridge and Rick (Danielle) Manus of Panama City, Fla.; brother, Brent Roberson of Dublin; and grandchildren, Everett Young and Wyatt Young.
Online condolences may be expressed at www.vaughnfh.com.
Vaughn Funeral Home of McRae had charge.