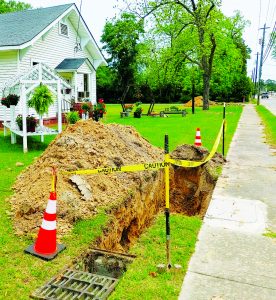 The sidewalk marks the end of the publc right-of-way. The work is on First Methodist Church property. 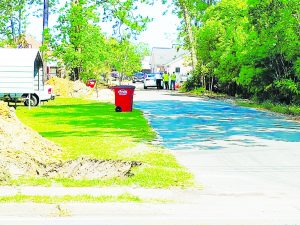 City of Hazlehurst workers were spotted last week doing work on private property along an alley that connects South Tallahassee Street to Cromartie Street by Hazlehurst First United Methodist Church.
Hazlehurst Mayor Bayne Stone defended the work in a telephone call Tuesday, saying Marcus Trowell of Trowell Insurance Agency was paying for pipe that will be placed on his land as part of the project to drain his property.
The Trowell Insurance Agency property has long suffered drainage problems as rains normally leave the back yard of the property covered with standing water. Heavy rains leave a virtual lake there.
“He’s paying for the materials that are going on his property, he’s paying his part and all we did for him was probably a 30 minute favor,” Stone explained. “So that’s not true (that city workers were working on private property).”
“I’ve neglected that problem for years,” Stone said of the flooding woes. “I’ve neglected it because I have property right next to him and if people thought I was working on my property they’d castrate me.”
The work is not restricted to the Trowell property but also onto and across property owned by the Methodist Church to run pipe across the Cromartie Street side of the property to connect to an existing drain system at the corner of Church and Cromartie streets. A large tree on the Methodist property was cut done to facilitate the work.
“I’m real proud of what we’ve been doing so please don’t make me look ugly,” the Mayor said.
Stone added that, “What folks don’t understand is if you were to call a surveyor and an engineer to work on the project it would probably cost $5,000 to $10,000. I’m doing all that work for free. I’m getting it all done except for a little pipe and masonry work.”