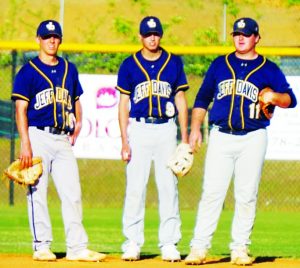 Ethan Hulett, Cade Walters and Hamp Hayes chat during a break in the action 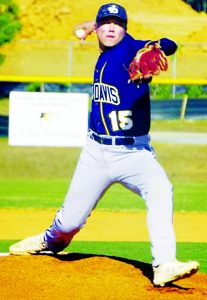 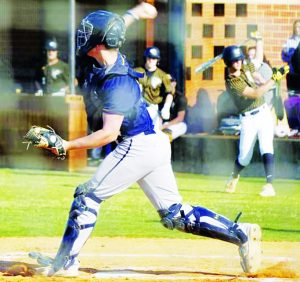 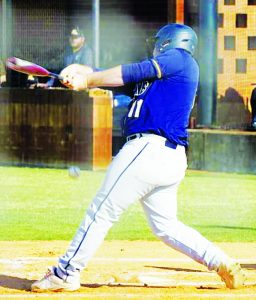 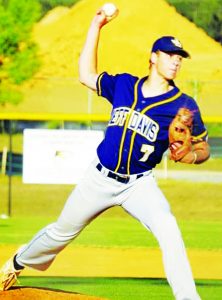 Jeff Davis High’s baseball team defeated East Laurens 17-2, 6-3 and 8-0 to improve to 18-11 and secure the No. 2 seed from Region 2-AA in the state playoffs.
Trenton Clance was 4-for-4 with 4 RBI in the 17-2 opener of the 3-game series, Ethan Griffin and Ethan Hulett both had a pair of hits in the 6-3 win and Cole Baucom threw a no-hitter in the 8-0 victory in the series finale.
The Yellow Jackets host Jasper County April 29-30 in the first round of the playoffs. The winner of that 3-game series plays the winner of Jefferson County and Fitzgerald May 4-5.
It took the Jackets only three innings to dispose of the Falcons in the opener, thanks to an 11-run third inning. JD spotted East Laurens to a 2-0 first inning lead and after that it was all Jeff Davis.
The Jackets wasted no time responding to the Falcons’ two first inning runs as Trenton Clance, Cade Walters and Ethan Griffin opened the bottom of the first with consecutive singles and the score was tied 2-2. Cam Williams drove in the third Jacket run and Matthew White lofted a sacrifice fly to center to make it 4-2.
Clance and Hamp Hayes had run-scoring singles in the second to up the score to 6-2.
The Jackets sent 14 batters to the plate in the 11-run third. The first eight batters reached base safely with Ethan Griffin coming up with the biggest hit, a bases-loaded triple that made it 12-2. After Hayes scored Griffin on a single, it was 13-2 and the Falcons had still not gotten anyone out. Trenton Clance hit a 2-run double that ended the game with the 15-run rule, 17-2.
The Jackets had 12 hits with Trenton Clance leading the way with a double, three singles and four RBI. Griffin had a single, a triple and four RBI, Hayes had a pair of singles and two RBI, Matthew Glass singled twice, Cade Walters had a single and two RBI, White had a single, a sacrifice fly and an RBI, Cason Clance had a sacrifice bunt and Williams drove in a run.
Williams was the winning pitcher. He threw three innings, giving up four hits, walking one and striking out four. East Laurens’ two runs were both unearned.
Things were a lot more difficult Thursday in East Dublin as the Falcons put up a battle before the Jackets prevailed 6-3.
The Jackets got single runs in the first two inning, with Trenton Clance singling, going to second on Walters’ sacrifice bunt and scoring on a Griffin single in the first. In the second, Hulett got a 2-out double and scored as Cason Clance was safe on an error.
East Laurens tied the game in the third but JD responded with a 3-run fourth. White started the fourth with a single and yielded to pinch runner Cole Baucom who stole second and scored as Glass reached on an error. Hulett followed with a triple to make it 4-2. Cason Clance grounded out to first to score Hulett to put JD up 5-2.
Duke Stone took over for starting pitcher White in the bottom of the fourth and struck out the side in order.
A Griffin single and a Hayes double in the fifth made it 6-2.
The Falcons scored on a double in the fifth but center fielder Cason Clance gunned down the runner at third as he tried to stretch the hit to a triple.
Hulett had his best day at the plate this season with a double, a triple and an RBI. Griffin singled twice and drove in a run, Hayes doubled in a run, Glass had a single and an RBI, Trenton Clance, White and Wlliams each singled, Cason Clance drove in a run and Walters had a sac bunt.
White was the winning pitcher. He threw three innings, giving up a pair of unearned runs on two hits, walking two and striking out six. Stone earned a save with an 11-strikeout performance in just four innings. He gave up one run on three hits and issued no free passes. Stone struck out the side in the fourth, sixth and seventh innings.
In the series finale, Baucom was almost untouchable. He fanned four batters in the first inning alone – the third strikeout victim reached on a dropped third strike — and he was quickly on his way to a 16 strikeout performance. In the 4th, 5th and 6th innings he struck out eight consecutive batters. After the batter reached on the dropped third strike in the first, Baucom retired 15 straight Falcons before a batter reached first on an error. A hit batter in the final inning was the only free pass he issued as only three East Laurens batters reached base. None of them advanced past first base. And the defense had only seven opportunities to field fair balls.
The Jacket offense got all the runs they needed in the first inning as Trenton Clance scored on a Hayes ground out to spot the Jackets to a 1-0 lead.
In the third, JD exploded for five runs as 10 batters went to the plate. Baucom opened the inning by bunting and reaching first on an error. Trenton Clance then doubled and pinch runner Cason Clance scored on a Walters sacrifice fly. Griffin then doubled in a run and, after a pair of walks loaded the bases, Williams singled in a run and Hulett singled to push two more runs across the plate to make it 6-0.
Griffin’s two out single and a Hayes double in the fourth made it 7-0.
The Jackets’ final run came in the sixth as Baucom singled and Griffin had a run-scoring single.
Griffin led the offense with two singles, a double and two RBI. Hayes had a double and two RBI, Trenton Clance doubled, Hulett had a single and two RBI, Williams had a single and an RBI, Baucom singled, and Walters had a sacrifice bunt, a sacrifice fly and an RBI.
Score by innings:
ELHS 2 0 0 – 2
JDHS 4 2 11 -17