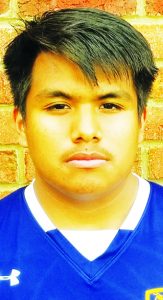 After a week of break, the boys came back April 13 motivated and refreshed looking forward to the playoffs. Before any of the playoffs, they had a non-region game against Cook County to keep them in rhythm. Cook County was be a possible opponent for the Jackets later in the playoffs.
The Jackets started the first half with a great display of football. They gained possession after the first minute and were moving the ball well. Rony Martinez played a fancy pass to Ivan Franco who took the ball all the way to the goal and cut in for a shot which was saved by the keeper, but Darian Cortez won the rebound and did not miss the opener for the boys in the 4th minute.
This was the beginning of a spectacular game for the Jackets # 10. The Jackets continued to have possession of the ball, but lost it some with Cook County trying to press higher in hopes of leveling the game. The Jackets continued playing well with complete passes and great distribution from the midfield. It was a delight watching the Jackets play. When the Jackets were playing their best, Cook won the ball on the Jackets defensive side and a great shot from their striker tied the game up 1-1.
This did not change anything on the Jackets side. They continued to play great soccer that would again put them in the lead in the 17th minute. After a throw in from Ivan, Cook made a terrible clearance that went high. As the ball dropped, Rony Martinez and a defender took a swing at the ball. Martinez won the ball that turned into a shot that went clear over the goalie’s head which was Rony’s 2nd goal of the season.
The Jackets lead extended to 2-1 as the game went on. The Jackets continued their offensive game with shots that were unlucky. Justin Aguirre had the chance to score another goal but kicked it well over the goal. A mistake from the Jacket defensive line led Cook to score their 2nd goal to tie it again 2-2.
The half ended 2-2 with both teams playing at the best of their ability with the Jackets having the edge in the game.
The second half started well for the Jackets dominating the offensive side and creating plenty of scoring opportunities. The Jackets had a shot that went and a cross that no one was able to finish. Cook started pushing up and slowly attacked the Jacket defense. This was finally rewarded with a penalty kick that Cook striker missed by hitting the post.
There were a few minutes where there was a tough battle in the midfield to win the ball but both teams could not overtake the other. The Jackets settled back into the game and slowly gained control. They received a corner kick that was a golden opportunity for the Jackets. Ariel took the kick and what seemed to be an easy ball to win for the Cook defender turned into a super volley from Darian Cortez.
The Jackets #10 extended the lead 3-2 in the 61st minute with that volley, his 2nd goal of the game but he was not done yet. In the 63rd minute, Cortez struck again with a great play from Ivan Franco on the wing. He crossed the ball and Darian scored an incredible backheel that put the stands to their feet. Cook County would score the last goal of the game but it was not enough to make the comeback.
The Jackets took the win ending their regular season with a banger of a game and a really superb display of futbol!
In the first round of the playoffs, the Jackets blanked Jasper County-Monticello 4-0 to advance to a second round match this Thursday against Thomasville, the No. 1 seed from Region 1-AA. Thomasville defeated Johnson-Augusta 10-0 in the first round.
Player of the Week – Oscar Marquez for his great performance against Cook and determination to become better for himself and team.