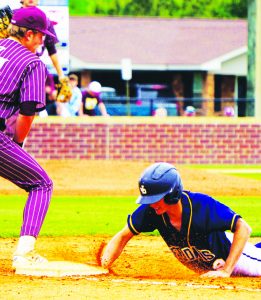 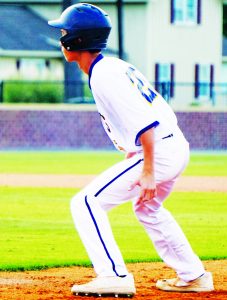 Vidalia High School’s baseball team showed why it is the No. 1 ranked Class AA baseball team in Georgia last week as they swept a 3-game series against Jeff Davis High 2-0, 5-3 and 11-0 in five innings.
With the wins the Indians improved to 20-4 overall and 12-0 in Region 2-AA while the Jackets slipped to 15-11 and 6-6.
The Jackets end the regular season this week with a home-away-home series against East Laurens (4-17 and 0-12) scheduled for Tuesday, Thursday and Friday.
Last Tuesday’s opener against Vidalia was a close pitchers’ duel as the Indians’ Landry Mead hurled a 2-hit shutout and the Jackets’ Cam Williams allowed only one earned run as he threw a 4-hitter.
Vidalia got both its runs in the fifth and Mead made them hold up for the victory.
Williams and Cade Walters got the only Jacket hits, both singles. Ethan Griffin reached on an error and Matthew White drew Mead’s only walk of the game as JD had only four baserunners.
The first 11 Jacket batters went down in order before Griffin reached on the error in the fourth. Williams followed with his single but that was as close as the Jackets got to scoring. Walters’ 2-out single came in the sixth and White drew a 2-out walk in the seventh.
Williams gave up one earned run on four hits, walked two and struck out seven.
Trailing 5-1 entering the final inning, the Jackets did not quit. Trenton Clance, Walters and Griffin started the seventh with a trio of singles. Clance and Walters advanced to second and third on a passed ball and Griffin’s single drove in Clance with Walters scoring on the throw to make it 5-3. Hamp Hayes followed with a walk to put the tying runs on base with no one out. But a strikeout, a pop foul and another strikeout ended the game.
The Jackets’ other run came in the second as Williams led off with a single, went to second on a passed ball, and scored on an Ethan Hulett single.
Griffin paced the offense with three singles and two RBI. Hulett had a run-scoring single, Trenton Clance, Walters, Williams, Glass and Cason Clance each had singles, Griffin and Glass both had sacrifices and Walters stole a base.
The Jackets defense had the game’s only double play, a Walters-to-Hulett-to-Hayes, 6-4-3 double play.
White took the loss, going three innings and giving up two runs on four hits, walking four and striking out three. Alex Mason pitched the final three innings, giving up three runs on seven hits, walking two and striking out none.
The series finale was anticlimactic as the Indians used a 16-hit attack to win in five innings. The Jacket bats managed only three hits, a Glass double and singles by Walters and Hayes.
Vidalia jumped on JD starting pitcher Cole Baucom for eight runs, seven earned, in just three innings. Baucom gave up 10 hits, walked one, hit one and struck out three. Reliever Duke Stone gave up three runs on six hits, a walk and three strikeouts in two innings on the mound.
Score by innings:
VHS 0 0 0 0 2 0 0 -2
JDHS 0 0 0 0 0 0 0 -0