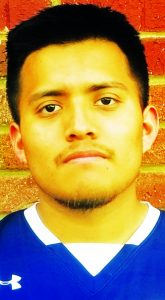 On March 30, soccer boys Jackets faced Toombs in a crucial game to possibly decide the fate of the region.
Right off the bat the Jackets pushed forward and brought the game to Toombs County who seemed unable to do anything. The Jackets had a shot on that the Keep was able to make an easy save. Next, Justin Aguirre took a shot from the 18 that zoomed by the Keeper’s post. Toombs recuperated and won possession of the ball. They settled into their game and scored their first goal after a big mistake from the Jacket defense. The Jackets pressed up butit was not be enough for the first half ended 1-0.
As the 2nd half started, the Jackets started to press high in hopes of winning the ball but found by a tough Toombs defense. Toombs scored a great shot from 15 yards from the midfield to put them up 2-0. The Jackets made subs to jumpstart their midfield again, but did not come to fruition. Toombs scored their 3rd goal after a sensational free kick. The Jackets had their goal with a last minute free kick in the 89th minute. Justin Aguirre took the kick, but the goalie was not be able to clear it correctly. Rony Martinez got the rebound and took a shot to give the Jackets a goal, but it would not be enough for them to come back. The Jackets took a tough loss, 3-1 against a great Toombs team.
On April 2, met Bacon County. Both teams understood that both had to win in order to win the region title. This was the clash of the season for both teams.
First half started as expected with both teams fighting hard to win the midfield. The Jackets sent out the first warning with a shot from Justin Aguirre was not be hard for the Keeper to handle. Next, senior keeper, Audiel Plascencia, made a great save to keep the score 0-0. The Jackets were playing a great defensive first half. The Jackets had another chance after a great play from Darian Cortez who shot, but after a few rebounds the ball could not find the back of the net. Again, the Jackets were dominating the first half and hitting Bacon with everything they had. Pablo Tapia took a free kick that went just over the crossbar. To end the first half, Justin Aguirre made a fantastic dribble into the box cutting in but took a few seconds too long to shoot, giving Bacon defense enough time to recover. The first half ended with the Jackets dominating, but not being able to score.
In the second half both teams started the same way. After a few minutes, the first goal appeared in favor of Bacon. A great volley found the back of the net even though Jacket’s keeper was able to put a hand on it. The Jackets pressed high, leaving spaces in the backline that Bacon took advantage of with a cross that put Bacon in the lead 2-0. Even though the Jackets pushed forward and were close to scoring in the last 10 minutes, it was not enough. The game ended region play, but not the Jackets’ season as they are locked in playoffs and looking to make a great run in the playoffs.
The Jackets played Cook County at home Tuesday before starting their playoff run the following week.
Jackets upcoming games: Atkinson County at home (JV) April 16.
Player of the Week: Jonathan Lara for his great support and help pushing his teammates.