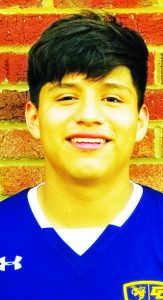 This was the game that was going to shape the region. The Jackets were coming into this game in fine form, the first time in the history of the soccer program, with an undefeated record.
Their opponent, Raiders of Bacon County, were coming after winning back-to-back games.
In the 5th minute, the Jackets quickly had a shot that rebounded off a Bacon defender that the goalie was able to save, but left the ball for Omar Andablo to shoot again. This time the keeper used his legs to make a great save. A few minutes later Darian Cortez stole the ball in the 10th minute to put the Jackets in the lead 1-0. He buried a hard ground shot past the keeper.
The Jackets had another shot the defense saved right on the goal line. The first half continued with the Jackets dominating the ball and playing great defense but that shifted in the last minutes of the half.
Bacon missed an open shot in front of senior Audiel Plascencia. Bacon then hit one off the crossbar and had a rally of corners that Jackets’ keeper was able to contain.
At the start of the 2nd half, the intensity grew. Both teams attempted to have possession on the offensive side of the field, but neither was able to connect a pass or have a good shot. In the 57th minute, the Jackets had what seemed a simple ball clearance, but it turned into a game changing opportunity for Bacon who took advantage of the mistake and scoref the goal to level the scoreboard.
Two minutes later, the Jackets had a shot from inside the box that creeped slowly outside the goal. In the 64th minute, the Jackets had one last shot from Cortez that rolled away from the goal. The shot looked like it was going straight into the back.
Bacon had another crossbar in the last 10 minutes of the game. In the last five minutes, Bacon scored the last goal of the game to end the undefeated streak for the Jackets. Both teams played an excellent game.
After a tough loss, the Jackets were looking for a big win against Vidalia, one of the toughest teams in the region. At the start, the Jackets were looking to quickly go up with a great volley from Cortez that went just over the crossbar. It started as a tough task to gain control of the ball and keep it, but it did not take long for the Jackets to gain possession. Then, it became a back-and-forth match in the middle of the first half. Both teams were attacking and creating goal opportunities. Vidalia had a corner kick that Plascencia saved. Right after, Vidalia took advantage of a defensive mistake that put the Jackets down by one. After that, it was a constant battle in the midfield. With a few minutes left in the first half, Pablo Tapia won the ball close to the midfield and dribbled all the way to the top of the 18 and took a hard ground shot that found the back of the net. The first half ended with a 1-1 score.
At the start of the 2nd half, the Jackets wasted no time and Cortez scored in the first minute to put the Jackets in the lead 2-1 with another ground assisted by a goal kick from Plascencia.
Freshman keeper Jose Lopez subbed for Plascencia after a foul in the box. The referee called a penalty kick on which Lopez made a sensational save to keep the Jackets in the lead. The intensity of the game grew which was becoming more evident with frustrated play and incomplete passes by both teams. A bad pass back from Jackets midfielder led to a steal and Vidalia scored to tie the game 2-2. The Jackets had one more chance to stop the overtime. A free kick was called in favor of the Jackets 20 yards from the halfline with only four minutes left. Tapia took the free kick and after a bad handle on the ball from the Vidalia keeper caused the ball to fall into the back of the net giving the Jackets their sixth win in region.
Player of the Week: Pablo Tapia for a great match against Vidalia that led to a comeback win.