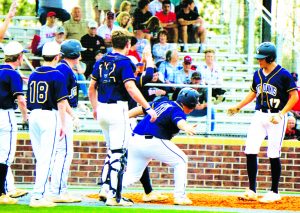 Cam Williams is welcomed home after 3-run homer against Appling

Jeff Davis High’s baseball team ran its win streak to six games last week and the pitching staff has now not given up an earned run in the last four games.
A 10-2 win over Appling County last Tuesday and a 7-0 victory over Screven County Thursday, the Jackets’ third shutout in four games, improved JD’s record to 9-5 entering this week’s opening of Region 2-AA play.
Jeff Davis traveled to Lyons yesterday (Tuesday) to play Toombs County for both teams’ region openers, host Toombs Thursday and return to Lyons Friday to end the 3-game series. Next week, the Jackets have a Tuesday-Thursday-Friday 3-game series with Bacon County, playing the first and last games in Alma and the middle game in Hazlehurst.
Against Appling last Tuesday, the teams were scoreless through 3 1/2 innings before the Jackets erupted for five runs. They tacked on four more in the fifth, and after the Pirates scored a pair of unearned runs in the top of the sixth, JD got one run back in the bottom of the inning to win 10-2.
In the fourth, Cam Williams broke up a 0-0 tie with a 3-run homer ripped over the left-center field fence. Ethan Griffin led off the inning with a double and Hamp Hayes walked to set up Williams’ blast. Consecutive singles by Matthew White, Trenton Clance and Ethan Hulett made it 4-0 and a Cason Clance run-scoring fielder’s choice made it 5-0. The Jackets had six hits in the inning.
Hayes start the fifth with a double and scored on a Williams single as Williams advanced all the way to third on the throw. Trenton Clance’s sacrifice fly, a Hulett double and a Cason Clance single upped the tally to 9-0.
The Jackets’ sixth inning run came when Trenton Clance was hit by a pitch with the bases loaded.
Williams was 3-for-4 with a pair of singles, a homer and four RBI to lead Jeff Davis’ 12-hit attack. Hulett singled and doubled and drove in two runs, Ethan Griffin and Hayes doubled, Cason Clance and Trenton Clance both had a single and two RBI, and Trenton added a sacrifice fly, and Cade Walters, Alex Mason and Matthew White all singled.
Williams also led the pitching and picked up the win. He threw 5 1/3 innings, giving up a pair of unearned runs on three hits, walking two, hitting one and fanning six. Mason pitched the final 1 2/3 innings, blanking Appling on two hits.
In the Screven County game, White threw a 2-hitter in six scoreless innings on the mound and Duke Stone preserved the shutout pitching the seventh.
The Gamecock starter had a slow start, walking the first three batters he faced. Lead-off hitter Cade Walters scored on a catcher’s error and Williams drove in a run on a fielder’s choice grounder to spot Jeff Davis to a 2-0 lead.
That score held until the sixth when the Jackets erupted for five runs. Matthew Glass, White, Trenton Clance and Hulett had consecutive 1-out singles and Carter Mullis followed with a 2-run double to make it 6-0. Walters then got the Jackets’ sixth straight hit with a single to drive in the final run.
White’s 2-hit gem included one walk and 11 strikeouts. Stone gave up no hits, hit a batter and struck out one.
Score by innings:
ACHS 0 0 0 0 0 2 0 – 2
JDHS 0 0 0 5 4 1 x -10