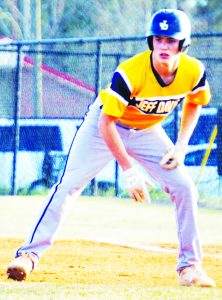 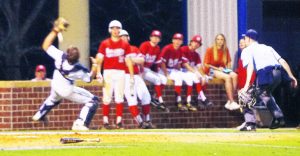 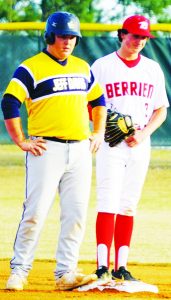 Jeff Davis High’s baseball team won four games last week, edging Berrien County in a pitchers duel, rallying from an error-filled performance through five innings against Screven County to get a come-from-behind win over the Gamecocks and win back-to-back shutouts against Berrien County and Appling County.
Over the final inning against Screven and the 13 innings against Berrien and Appling, the Jackets out-scored their opponents 25-0, winning 17-10 over Screven Thursday in Sylvania, 10-0 in six innings on Matthew White’s no-hitter Friday in Hazlehurst and 3-0 over Appling County Saturday in Baxley. Last Tuesday in Nashville JD downed Berrien County 2-1.
The wins give the Jackets a 7-5 record.
In Nashville, Cam Williams turned in a complete game 2-hitter. The Jackets got single runs in the first and second innings, and Williams made the two runs hold up.
In the first, Matthew Glass drew a 2-out walk and pinch runner Carter Mullis scored on a Hamp Hayes double.
In the second, the Jackets loaded the bases with two outs and Berrien’s pitcher balked to send Alex Mason across the plate.
Nashville’s only run was unearned and came in the sixth inning.
Hayes had a double, a single and an RBI, and White and Mason both singled.
Williams gave up no earned runs on two hits, walked none and struck out 11.
JD survived a scare in Sylvania as they entered the final inning down 10-5. The Jacket bats came alive in their last chance with four singles, three doubles and 12 runs to win 17-10. Screven used four pitchers in the explosive inning and they combined to give up seven hits, six walks, a wild pitch, two hit batters and two steals. Plus there was a passed ball.
Sixteen Jackets went to the plate in the inning. White, Cason Clance, Mullis and Ethan Hulett each had a pair of RBI in the seventh.
The Jackets played poorly through the first five innings, committing seven errors
For the game the Jackets had 13 hits led by Cason Clance who was 3-for-4 with 4 RBI. Hayes had two doubles, a single and an RBI, Williams had a pair of singles and two RBI, White doubled and drove in two runs, Mullis had a single and three RBI, Hulett had a 2-run double, and Mason and Trenton Clance both had a single and an RBI.
Josh Griffin picked up the win pitching only the sixth inning, giving up no runs, no hits, no walks and striking out two. Mason started on the mound and went three innings, he gave up four earned runs on seven hits, walked one, hit one and struck out four. Duke Stone threw two innings, giving up a pair of unearned runs on one hit, three walks and four strikeouts. Trenton Clance threw the final inning, retiring all three batters he faced, two by strikeout.
White’s pitching was the story of the game against Berrien County as he no-hit the visiting Rebels in a complete game start. He retired the first 12 batters he faced until a Berrien batter reached on an error to start the fifth. The only other baserunner White allowed came in the same inning as he issued his only walk of the game. With two outs and two on, Tyler Brewer came up with a great catch on a hard-hit liner to left field to end the inning and keep White’s no-hitter alive.
The Jackets’ big inning came in the bottom of the fifth as Hayes, Williams and Brewer came up with singles, Mason doubled and Berrien pitching yielded three walks and five runs.
Glass had a double and a single, Hayes, Brewer and Cason Clance each had two singles and an RBI, Walters had a single and two RBI, Williams had a single and an RBI, Conner Rea singled and Ethan Hulett drove in two runs.
Against Appling, the Jackets got all three of their runs and their only three hits in the first inning and Cole Baucom made the lead stand up with six, no-run innings. After the Jackets’ 3-run first inning, Pirate pitcher Thomas Higgins held the Jackets without a hit the remainder of the game, in one stretch retiring 16 batters in a row, and 18 of the final 19.
Walters started the game with a single, went to second on a Cason Clance sacrifice bunt, took third as Glass singled, and scored on a Hayes double. Williams grounded out to score pinch runner Mullis and move Hayes to third, and Hayes came home on a wild pitch.
The Jacket defense came up with outstanding plays time after time. The Pirates got two runners on in the first, third, fifth and sixth, but each time Baucom either pitched his way out of a jam or relied on his defense to save the inning.
Baucom gave up six hits, walked one, hit one and struck out nine. Duke Stone earned a save pitching the seventh inns, giving up a hit and no free passes.
Score by innings:
JDHS 0 1 1 3 0 0 12 -17
SCHS 0 1 4 3 2 0 0 -10