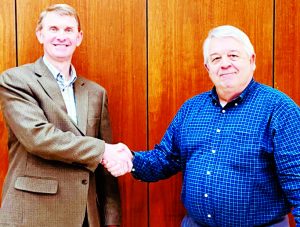 The Board of Directors and management of Bank of Hazlehurst announce the hiring of James E. (Butch) Kirkley II to the position of President and Chief Executive Officer and director of the Bank. He is replacing Leonard H Bateman Sr., who is retiring. Butch is a native of Eastman, and had been with Citizens Bank and Trust in Eastman since 2013.
Butch was President and COO of Citizens Bank and Trust of Eastman, now known as Great Oaks Bank.
“Butch has demonstrated strong leadership qualities in Eastman,” said Board of Directors Chair Jim Peterson. “We are very pleased to have him as the senior leader of our bank and Hazlehurst Investors.”
Butch is married to Tonya Beasley Kirkley and has two children, Spencer Kirkley and Alex Lampp. He is a 1989 graduate of Dodge County High School and holds a BBA in finance with an emphasis in banking from Georgia Southern University. He is also a graduate of Georgia Banking School sponsored by the Georgia Bankers Association. Although his full-time banking career began in 1997, he actually had his start in the business with Citizens Bank and Trust as his first job in 1987 at the age of 16.
He has been very active in his community, having completed the Leadership Dodge program, served as past chairman of the Eastman Dodge County Chamber of Commerce and served as the chairman of the Dodge County Eastman Development Authority.
“We are excited to have located and employed such a great fit for Bank of Hazlehurst! He should be able bring our bank to the next level going forward,” said Peterson.
“Having someone like Butch, with strong experience, credit knowledge, farm lending experience and a working familiarity with businesses from South Georgia is a great opportunity for our bank” said retiring President Bateman.
“The banking industry has struggled through the great recession and farming issues afterward, and our bank was not insulated from those challenges. However, as the economy continues to recover, our bank is strong, ready to grow, make loans, evolve and continue the long tradition of support to our community. We have an excellent team of bankers, who are ready to serve new and existing customers. I am excited about the future and honored to lead this team,” said Kirkley
The Bank of Hazlehurst is the only locally owned and operated bank in Hazlehurst and Jeff Davis County with two convenient offices.