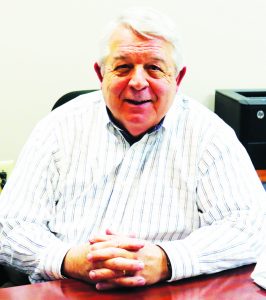 Bank of Hazlehurst CEO Leonard Bateman will retire this week after 51 years in the banking industry, the last 15 in Hazlehurst.
Friday will be his final day, although Bateman said this week he will be at the bank next Monday to welcome his replacement.
Bateman began his banking career in Jacksonville, Fla., with stints in Waycross, Homerville and Patterson before settling in in Hazlehurst. While he and his wife, Vickie, will move to their second home on Lake Oconee, the couple will continue to spend much of their time in Hazlehurst where Vickie owns and operates Bateman Realty.
“This is still our home,” Bateman said of Jeff Davis County where the two have grown deep roots. “We love this town, Hazlehurst has been very good to us. We’ve met a lot of good people and have made a lot of good friends.”
In a half century of working in the banking industry, Bateman has seen a lot of changes.
“In the 1970s, there were only two types of loans — consumer loans and business loans,” he said. “And you signed only one piece of paper. They were both the same wording except for ‘consumer’ on one and ‘business’ on the other.” Quite a contrast from today’s loans which require a dozen or more signatures.
Along with the changes has come a lot more stress, which leads to fewer people staying in the business for lengthy careers.
“It’s time to let the younger people take over,” Bateman said.
The Batemans’ Lake Oconee home will allow the couple to be closer to two of their three children (the third, Ryan, is a loan officer at the Bank of Hazlehurst) and their four grandsons.
“Vickie wants to stay in real estate,” he said, “so we’ll still be spending a lot of time in Hazlehurst.”
His plans for retirement? “I say I’ll do a lot of hunting and fishing,” he said. “But my wife says differently.”
“The Bank of Hazlehurst has experienced significant growth during Leonard’s 15 years as CEO,” said Bank of Hazlehurst Board of Directors Chairman Jim Peterson. “His leadership and success through some difficult economies are a tribute to his character and honesty.”
“He has been a mentor and friend to every team member and a valuable part of the community,” Peterson continued. “Everyone associated with the Bank of Hazlehurst will miss Leonard. We hope he and Vickie enjoy a long and happy retirement and that the fish are always biting!”