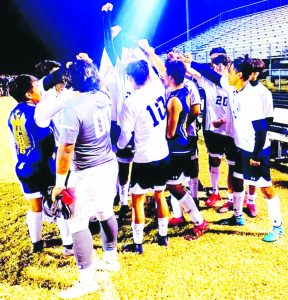 Jeff Davis boys soccer won against a tough opponent, Tattnall County Battle Creek Warriors. This was the first official game of the season after having to cancel the scrimmage against GMC.
During the first 15 minutes of the game, both teams seemed to be having a tough battle to gain control of the game in the midfield with not many key plays on the offensive side of the ball. Finally, the Yellow Jackets gained position and took control of the offensive side. Justin Aguirre, sophomore, took a free kick from the arc that the keep was able to control with some trouble. This would be the first warning for the keeper.
During minute 23, Justin Aguirre would receive the ball again outside the 18, after a rebound, and would fire off a spectacular shot that the keeper would not block. The spectacular shot put the Yellow Jacket up 1-0 to give the boys that boost of confidence to push forward and look for a 2nd goal.
The Yellow Jackets gained control of the game defensively and offensively. Unfortunately, the boys would receive a red card right before halftime.
At the beginning of 2nd half, Tattnall’s push offensively to tie the game was stopped by the Jackets’ strong defense. As the game went on, the Yellow Jackets won a corner kick which would be greatly taken advantage by their offense. A set play by the boys would see senior Darian Cortes take advantage with a smashing header that would kiss the back of the net. This would increase their score 2-0 over the Warriors.
Throughout the game, the Yellow jackets’ rock solid defense and an incredible game from Ignacio Lopez, enior, would see the boys hold out Tattnal until the end.
On Monday, the Boys played the Appling County Pirates in a thriller game that ended 4-4.
It was a back and forth game during the first half. Appling county would start the count off with an early 1-0 lead in the 7th minute. The Yellow Jackets would quickly gain a corner and Justin Aguirre would turn it into gold with a header to even the scoreboard.
Appling would go up again with a 2-1 lead. Darian Cortes would receive a ball at the 40-yard line and dribble until the 18 and shoot a very strong shot towards the bottom corner which would see the Jackets equalizing the score, 2-2.
The Pirates would score again right before halftime to have the score 3-2.
Starting the 2nd half, the Yellow Jackets dominated the game offensively and defensively. Their hard work would lead to an out of this world goal by Ariel Maldonado in the 54th minute to tie the game once again.
The Pirates would see themselves score one more goal after an unlucky deflection from one of the JD defenders but the game was not over yet. The JD boys would tie the game once more with a great shot from Justin Aguirre scoring his 2nd goal of the night in the 84th minute, which would see both teams take home a tie.
The boys will look to extend their record this season as they face Bryan Co. Friday at 7 p.m. in the Pinelands.