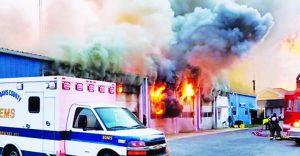 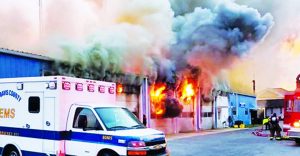 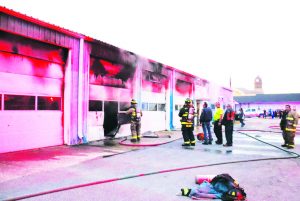 The Georgia State Fire Marshall’s office and insurance officials are looking into a Saturday evening fire that wiped out much of Jeff Davis County’s emergency services.
The fire, which originated in the truck bay area of the Jeff Davis County Emergency Medical Service (EMS), claimed a fleet of four ambulances and a Jeff Davis County Coroner’s office vehicle. It spread to the adjoining Jeff Davis Sheriff’s Department E-911 Center and the Jeff Davis County Emergency Management Agency (EMA) offices, essentially putting all three services out of operation temporarily.
But within a matter of hours all three services had recovered sufficiently to continue their protection services for Jeff Davis County citizens.
The E-911 services were essentially never interrupted. Sheriff Preston Bohannon said when the fire shut down E-911, he contacted the E-911 providers who switched all incoming calls to the Appling County E-911 center.
“If you called 911 from your house, your call would have been answered immediately in Appling County,” Sheriff Bohannon said. “We have received no information that any call was not answered.”
Sheriff Bohannon said that by 4:30 a.m. Sunday following the Saturday evening fire, the Jeff Davis E-911 was in operation and the incoming calls were transferred from Appling County back to Jeff Davis County in the Jeff Davis County mobile command center.
Tuesday, Sheriff Bohannon said the E-911 service was to begin operating by the end of the day in the former environmental training facility on Quality Drive off the Douglas Highway.
He added that there would be no lobby at the Quality Drive location and if anyone needed help with any non-emergency situation, they can call the Sheriff’s Department main number at 912-375-6600 or the E-911 non-emergency number at 912-375-6621.
EMA Director and City-County Fire Chief Charles Wasdin confirmed the truck bay as the origin of Saturday’s fire but the cause of the fire is still under investigation. Officials do not suspect foul play was involved.
The EMS received assistance from Appling County and Coffee County as both loaned an ambulance to Jeff Davis county until other arrangements could be made.
Wasdin said the EMS had one surplus ambulance outside the building that the county was planning to sell and EMS members were working to get the ambulance operational. In the meantime, the EMS has leased two ambulances for use until county officials complete plans to restore the fleet of ambulances.
The EMA has been moved to the Hazlehurst Fire Department station on Pat Dixon Road and is fully operational.
“We are very appreciative of the outpouring of support from the state, and area and regional counties,” said Wasdin, who added that he has been receiving calls from all over the state.
The Georgia State Fire Commissioner has called the county and Gov. Brian Kemp visited Hazlehurst to view the fire damage.
“It’s been amazing,” Wasdin said of the statewide support that has been pouring in.