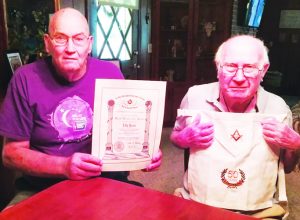 For the past few decades, Wyatt W. “Buddy” Spann has proudly served his country and community. The 93-year-old served in World War II in both the Army and Navy, and for the record, is the only World War II veteran from Jeff Davis County who is still living.
Spann later worked with Farm Equipment Company before becoming the owner of C&S Buick-Pontiac-GMC. Plus, he joined the political arena as a city councilman and mayor of Hazlehurst.
Perhaps one of Spann’s grandest accomplishments, though, is that he recently received his 50-year apron from Hazlehurst Masonic Lodge 283 and the Grand Lodge of Georgia. Herman Shuman, the lodge’s Worshipful Master who died Oct. 2 of last year, presented the award to Spann just weeks before he passed away. Spann also has the first apron he received as a new member in 1968 – and it’s still in its original envelope.
“Masons wear the aprons at different functions to signify they are a Mason,” said Spann. “The Masons encourage its members to go out and do things for people. It’s all about good relationships.”
He added that 50-year members are rare, although several in Hazlehurst and Jeff Davis County attained that mark.
The Masons, a benevolent society that helps people in charitable ways, is the basic organizational unit of Freemasonry. The Hazlehurst lodge is active and meets each month at its home base at 105 Hillcrest Avenue. For more information on joining, visit the Grand Lodge of Georgia website at www.glofga.org.