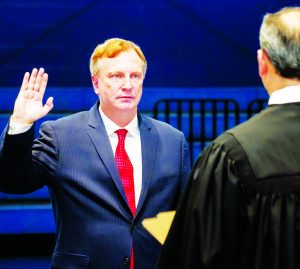 With family, supporters, and local leaders in attendance, Keith Higgins was sworn in as District Attorney for the Brunswick Judicial Circuit Dec. 21. Superior Court Judge Stephen Kelley administered the oath at Glynn County’s Selden Park gymnasium with masked spectators in socially distanced seating.
Higgins will take over as District Attorney Jan. 4.
After thanking his family and local leaders, Higgins appealed to the citizens of the Brunswick Judicial Circuit, which encompasses Appling, Camden, Glynn, Jeff Davis and Wayne counties.
“I want to thank all of the people who worked tirelessly to get me on the ballot and get me elected,” Higgins said. “I want you to know that I still need your help, along with the help of everyone else in this circuit.”
Higgins again expressed his desire to establish citizen advisory councils in each of the five counties to help his office understand the issues affecting the respective communities and ultimately serve the public interest.
Higgins ran as an Independent candidate and in November defeated incumbent Jackie Johnson (R) securing 45,415 votes (52.8%) to Johnson’s 40,600 (47.2%). From the outset, Higgins promised to provide “Justice for All,” regardless of race, gender, or party affiliation. He is working to assemble his team of prosecutors and administrators to run the office and manage a slew of existing cases, many of which were delayed in 2020 due to the COVID-19 pandemic and its associated restrictions on standard court processes.
The District Attorney is the highest-ranking law enforcement official in the Brunswick Judicial Circuit. The District Attorney manages the Prosecutor’s office, advises law enforcement, and determines what cases are prosecuted.
Higgins, a graduate of Mercer Law School, has practiced law in the Brunswick Judicial Circuit for more than 30 years, including 23 years as Assistant District Attorney. For the last decade, Higgins has been in private practice as a defense attorney in Brunswick.