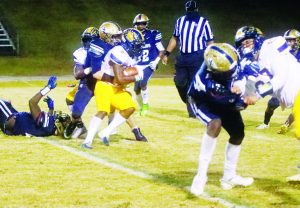 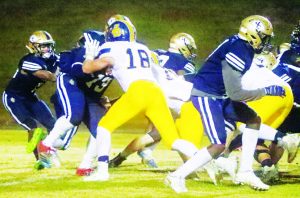 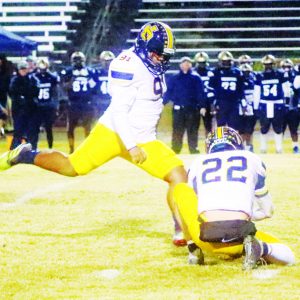 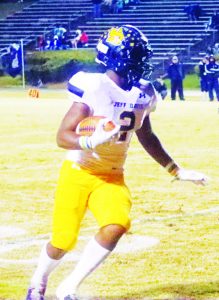 The most successful Jeff Davis High School football season in almost a quarter of a century came to an end Friday night in a rainy, windy second round playoff game in Jefferson County as Coach Lance Helton’s Yellow Jackets fell 42-29 to the Jefferson County Warriors.
Not since 1997 has a JDHS football team been as successful as the 2020 edition which closed out the season with a 9-2 record. Jefferson County advanced to the state quarterfinals with a 9-2 record and a 9-game winning streak.
A nightmarish second quarter spelled doom for the Yellow Jackets as the homestanding warriors put 26 points on the board to take a 34-7 lead, a deficit the Jackets were unable to overcome despite outscoring Jefferson County 22-8 over the remainder of the game. During the quarter, the Yellow Jackets made two crucial mistakes, a miss-timed jump on a potential interception, and a pass interception. Those mistakes cost the Yellow Jackets 16 points, three more than the 13-point margin of victory.
After being down 34-14 at halftime, the Jackets dominated the Warriors whose offense mainly consisted of running straight up the middle behind a massive front wall as Jefferson County had what may have been the largest offensive line a Jacket team has ever faced. Certainly the largest this season.
The Jeff Davis offense was particularly effective in the second half while the defense made the bigger Warriors scrap for every yard they could get. But the 20-point halftime deficit was too much to overcome.
The Yellow Jackets got the first break of the game on Jefferson County’s first possession as JD recovered a fumble at the Warrior 27. Jeff Davis got a first down at the 16 but a 5-yd. penalty pushed them back to the 21 and they couldn’t recover. On 4th-and-18 at the 25, Audiel Placencia attempted a 42-yd. field goal but it was blocked. A Jefferson defender scooped up the pigskin and raced all the way to the Jacket 35 to set up the Warriors’ first score.
It didn’t come easy as the Jeff Davis defense held Jefferson County to a 4th-and-3 at the 28 and when the Warriors went for it a JC back raced 28 yards into the end zone. The 2-pt. conversion run was good to make it 8-0.
After recovering an onside kick, the Jackets took over at midfield and three plays later Austin Wood broke into the clear and outraced everyone to the end zone for a 47-yd. TD run. Placencia kicked the extra point and it was 8-7 early in the second quarter.
Four plays after the kickoff, a Jefferson back broke open for a 70-yd. scoring run and the nightmare began.
On the first play after the kickoff, the Warriors recovered a fumble at the Jacket 37 and scored six plays later.
On their next possession, facing a 3rd-and-6, Jefferson went to the air and a Jacket defender was poised to pick off the pass. But he jumped too soon and the ball sailed over his outstretch fingertips into the arms of the waiting receiver who took it in for a 63-yd. touchdown pass, and quickly the Jackets found themselves down 28-7.
On the sixth play of the Jackets’ next possession, a Warrior defender stepped in front of a pass, picking it off on the run and raced 69 yards for a 34-7 Jefferson County lead.
A lesser team would have folded their tents for a running-clock rout in the second half. But the Jackets battled back. Willie Skipper took the ensuing kickoff up the middle of the field, broke free from a pair of tacklers and raced to the left sidelines all the way for the score. Placencia booted the extra point to make it 34-14 at halftime.
The Yellow Jackets wasted little time scoring again after intermission. Starting at their 35, Aahiyus Allen went around his right side for 25 yards and then Wood went around the left side for 40 yards and a score. Placencia’s kick cut the margin to 34-21.
Jefferson then put together a 10-play possession but linebacker Carter Mullis nailed a runner for a 2-yd. loss followed by a pair of incomplete passes and the Jackets took over on downs at their own 29.
Allen quickly picked up 15 yards off a block from Chasten Googe but a penalty nullified the gain. Then, with Googe leading the downfield blocking, Wood picked up 14 yards and a first down at the Jeff Davis 44. On 3rd-and-5 from the 49, Allen slipped on the wet ground and the Jackets were forced to punt.
Jefferson fumbled the punt and the Jackets recovered at the Warrior 23. After a pair of penalties backed the ball to the 40, a 7-yd. pass completion ended with a fumble and Jefferson recovered at their own 34.
A 22-yd. run quickly moved the ball into Jacket territory but then the Jeff Davis defense got stingy. Battling the much larger Jefferson County offensive line, the Jeff Davis defense held the Warriors to a 4th-and-2 at the 36. But the eager defenders jumped offsides on the next play giving Jefferson a new set of downs at the JD 31. Seven plays later, Jefferson faced another 4th-and-2, this time at the Jacket 3. They barely got the first down and then scored from the one on the next play. It was a hard-fought drive as the smaller Jeff Davis defense battled fiercely as Jefferson took a 42-21 lead.
Again, the Jackets refused to quit. On 4th-and-7, with quarterback Cade Walters under tremendous pressure, he was able to find an open C.J. Parker who took in the pass and raced 36 yards to the Jefferson County 23. After Allen picked up a yard, the Jackets used a little razzle-dazzle and Walters connected with Parker in the end zone. The kick was blocked but a penalty moved the ball half the distance to the goal and Allen raced in with the 2-pt, conversion to make it 42-29.
The Jackets almost got the ball again as they held Jefferson to 4th-and-2 but a 5-yd. run moved the chains and the Warriors were able to kneel on the ball to run the clock down to zero.
JDHS    0    14    7    8    -29
JCHS    8    26    0    8    -42