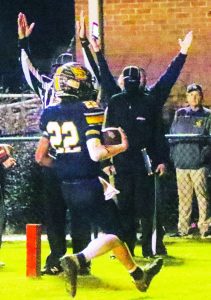 Refs get an assist calling this Cade Walters touchdown 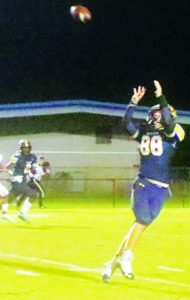 Matthew Glass pulls in a touchdown pass from Cade Walters 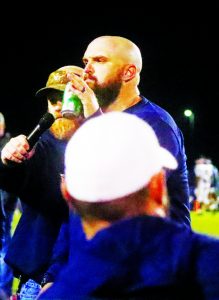 Coach Lance Helton talks to his players after the game 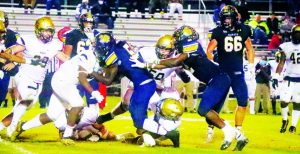 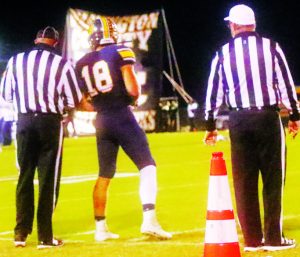 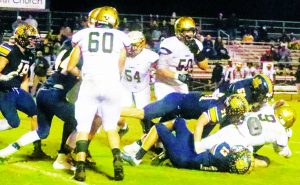 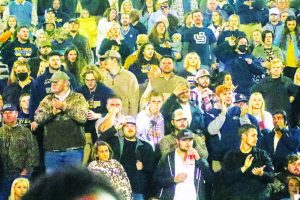 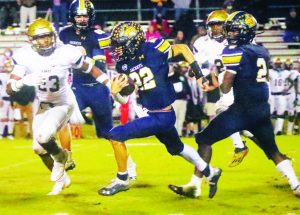 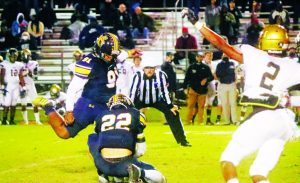 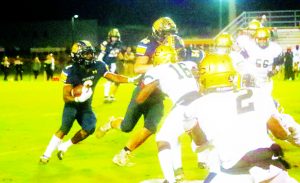 The Jeff Davis-Washington County playoff game last Friday in Hazlehurst was one of the most exciting football games Jacket fans have have been treated to in years.
Two very good football teams battled it out, toe-to-toe in a game that came down to the wire with the Yellow Jackets prevailing over the visiting Golden Hawks 28-25 for the first Jeff Davis High football playoff victory since 1997.
Both teams came up with clutch plays throughout the game, surviving after having their backs to the wall again and again.
The Jackets’ Auriel Placencia sailed the opening kickoff into the end zone and Washington County’s first possession ended in a 4-yd.touchdown run. The Hawks marched 80 yards in 10 plays. During the drive, Washington County senior running back Malyk Walker showed why he is the leading high school rusher in Georgia, regardless of classification, as he spearheaded the march. Walker had runs of 21 and 36 yards in the drive which he capped with a 4-yd. run.
The Yellow Jackets fought back, scoring on their first two possessions to take a 14-7 lead.
On their first possession they sprinted 65 yards in just four plays with Austin Wood scoring on a 47-yd. jaunt off tackle with blocking and faking so effective no one came close to touching the senior tailback. Chasten Googe and Nate Lewis threw the key blocks to spring Wood loose. Placencia added the P.A.T. to tie the game 7-7.
After holding the Hawks to a 3-and-out, during which senior tackle Andrew Aycock flushed the quarterback out of the pocket to foil a pass attempt, the Jackets began their second possession at their own 46. It took them four plays again, this time overcoming a pair of 5-yd. walk-offs.
The big play on the drive, which began in the first quarter and ended early in the second, came on 1st-and 15 from the Hawks 48 when quarterback Cade Walters hit wide-open junior tight end Matthew Glass for a 48-yd. scoring strike. Placencia made it 14-7.
After the kickoff, Washington County started going the wrong way with a pair of holding penalties leaving them facing 2nd-and-28 at their own 23. Then on back-to-back pass attempts defensive end James Wood pressured the quarterback to scramble, picking up only five yards in two tries making it 4th-and-22.
On the first play after Washington County punted, the Hawks picked off a pass and returned the ball 62 yards, all the way to the Jacket 16. On 4th-and-4 from the JD 10, the Hawks booted a 27-yd. field goal to close to within 14-10.
The Jackets weren’t finished though as they then put together a 13-play possession, moving from their own 48 to the Hawks 16 before stalling. On 4th-and-12 from the 33, Walters retreated to punt and threw instead to Aahiyus Allen for 17 yards and a first down at the 16. After a pair of incomplete passes, with time running out on the first half clock, Placencia came on to try a 33-yd. field goal but it missed the mark and the two teams went into the dressing room at intermission with Jeff Davis up 17-14.
JD took the second half kickoff and rolled 73 yards in seven plays to up their lead to 21-10. The drive got off to a bad start as a holding penalty left the Jackets with a 1st-and-20 on their 27. On 3rd-and-14, Allen broke loose for a 48-yd. gallop to the Washington County 19. On 4th-and-1 from the 8, Allen broke through tackles for the score. Again, Placencia was true with his kick.
After Placencia’s kickoff sailed through the end zone, it took one play for the Hawks to close the gap. Walker broke open and outran everyone for an 80-yd. TD run. The kick made it 21-17.
Jeff Davis responded quickly, going 72 yards in a time-consuming, 12-play drive. Austin Wood had three carries for 28 yards in the drive, Walters kept three times for 21 yards and Allen had three carries for 14 yards. Walters’ 2-yd. scoring run was a cakewalk as his fake to his tailback fooled the Hawk defenders. The blocking of the Jacket offensive line was so efficient they did not face a third down during the march. After Placencia’s kick, it was 28-17.
But the Hawks weren’t finished as they put together a 6-play scoring drive covering 65 yards. Walker capped the drive with a 22-yd. run. A pass for the 2-pt. conversion got Washington County within a field goal at 28-25.
The Jeff Davis offense consumed a lot of the remaining game time on their next possession, putting together a 12-play drive from their 48 to the Hawk 21. The big play in the possession came on 3rd-and-23 from the JD 35 when the offensive line opened up a huge hole and Austin Wood galloped through for a 28-yd. run and a fresh set of downs. On 4th-and-6 from the 21, Placencia tried a 38-yd. field goal but missed.
With time running low, Washington County took over at their own 20 and it was up to the Yellow Jacket defense to save the victory. The Hawks quickly got a first down at the 34 where a 9-yd. penalty proved to be their undoing. After a 10-yd. run, freshman linebacker Carter Mullis stopped a runner for no gain and after an incomplete pass, it was 4th-and-9, making the next play the most crucial of the game. On a pass attempt, Lewis came in from his defensive end position and tripped the quarterback as he tried to throw and the ball sailed harmlessly out of bounds.
The Jeff Davis offense took over at the Washington County 35, got a first down at the 25 and two plays later, Walters knelt on the ball to run off the remaining seconds on the clock.
Jeff Davis improved to 9-1 with the victory, while Washington County ended its season with a 6-6 mark.
Score by quarters:
WCHS    7    3    7    8    -25
JDHS    7    7    14    0    -28