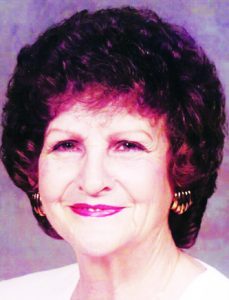 Miles Funeral Home in Hazlehurst announces the memorial service for Mrs. Mary JoAnn Ford, 76, of Vidalia, formerly of Hazlehurst, who passed away Nov. 6. Services will be held at a later date.
Mrs. Ford was born in Jeff Davis County. She was the daughter of the late Samuel Tribble Moon and Bertie Adrian Overstreet Moon. She was preceded in death by brothers Samuel Moon, Bobby Moon, and Donald Moon; sisters Carolyn Moon and Betty Moon Hartless. Mrs. Ford was a homemaker. She was a dedicated mother first and foremost. She treasured her children and embraced every moment with them. She especially loved her role as Grandma. She had a vivacious personality, and always made people around her laugh. She made friends everywhere she went, and loved helping those in need. She enjoyed her grandchildren and Darts. She will be missed dearly by all of her friends and family.
Survivors include daughter and son-in-law Diane and Anthony Erlenbaugh of Eagle Point, Ore.; son Ray Partin of Hazlehurst; cousins Ester Welch of Hazlehurst and Kendra Welch of Statesboro; sister Linda Pritchett of Hazlehurst; brother Edward Moon of Hazlehurst; grandchildren Austin Erlenbaugh, Taylor Brown and Brady Erlenbaugh; several nieces, nephews and cousins.