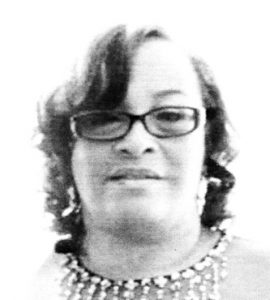 Services for Mrs. Lauretta Bradshaw Griffin, 64, who died Oct. 23 at Piedmont Henry Hospital in Stockbridge, were held Oct. 31 at King Brothers Funeral Home.
Pastor Henry Hall gave the eulogy and burial was in Hall and Wilcox Cemetery in Hazlehurst.
Mrs. Griffin, born in Denton, was the daughter of the late Flozell Bradshaw and Geneva Bradshaw. At an early age she became a member of Bethel AME Church in Denton. After relocating to Atlanta, she became an active member of Salem Baptist Church. She was a 1973 graduate of Jeff Davis High School and continued her studies at South Georgia College. She later went to graduate from Atlanta Metropolitan State College as a licensed nail technician and later was a caregiver to many. Her many jobs included a secretary at Morehouse College, 20 years of service at CNA Insurance and was also employed by Delta Global Services. She loved to travel and experience new things, but her greatest love was spoiling and spending time with her grandchildren.
Survivors include her two children, Jabarrie Jones (Nikki) of College Park, Renee Burts (DeMarcus) of Ellenwood; brother, Flozzell Bradshaw of Lumber City; grandchildren, Jordan, Jabarrie Ty, Cali, Chloe, Madison, Chase, and Camryn and a host of relatives and friends.
Active pallbearers were nephews and friends.
Honorary pallbearers were the Class of 1973.
Condolences may be made at kingbrothersfh.com.
King Brothers Funeral Home of Hazlehurst was in charge of arrangements.