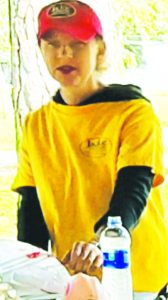 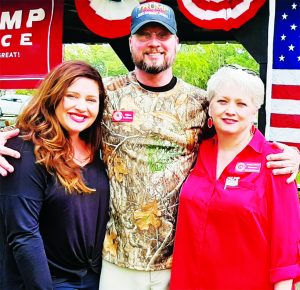 The Jeff Davis County Republican Party held a rally Saturday afternoon in Weatherly Park, attracting locals as well as candidates and out of town guests.
Following an invocation by the Rev. Robert Wigley, candidates were each given a few minutes to speak to the crowd about their qualifications and campaign issues. Voter registration packets were provided to those who needed them, and each candidate provided campaign materials. Grilled hamburgers and hot dogs were served, and no one left hungry.
Among the guests were Jackie Johnson and Keith Higgins, both running for District Attorney; Kandiss Taylor, candidate for US Senate, and Kathy Latham, state party chair for counties with less than 80,000 people.
Speaking on behalf of the JD GOP, John Reed expressed his appreciation to local officials, law enforcement, and especially Mayor Bayne Stone and the staff at City Hall for their assistance. “We could not have had this event without their help.” Reed also praised the local community for “coming together to show their support.” He concluded by urging everyone to exercise their right to vote in November.