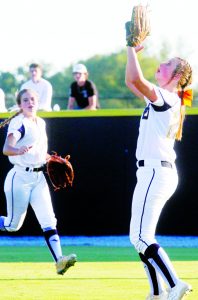 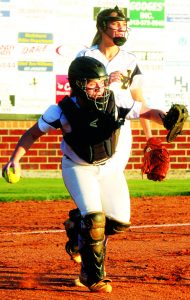 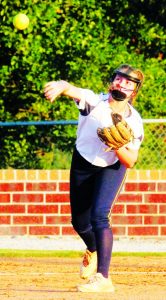 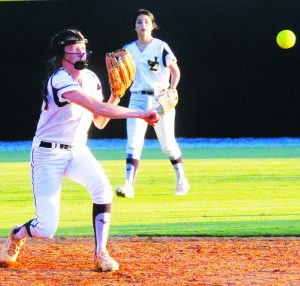 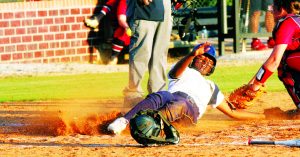 Jeff Davis High’s softball team improved to 18-4 and ran their win streak to six games as they defeated Appling County 2-1 last Wednesday, Toombs County 10-2 Thursday and Bacon County 9-1 Monday. All three games were played in Hazlehurst.
The Appling game was a pitchers’ duel with Jeff Davis’ Kesleigh Poe and Kelsey Parlor giving up only three hits and Appling yielding only four hits.
The Lady Jackets got two unearned runs in the first inning and made them stand up for the victory.
Paige Carter opened the bottom of the first reaching first when she was hit by a pitch. Jenna Miles then reached on a bunt single. Two outs later, the Lady Jackets had runners at 2nd and 3rd when Annalese Poole hit a grounder to third and reached on an error as two runners scored.
Poe retired the Lady Pirates in order the first two innings but a walk and a single put two on with no one out. A fly out, a pop out and a fielder’s choice grounder to third ended the inning.
In the fourth, Appling again got their first two batters on base with a walk and a single. But catcher Kalleigh Sellers got a big out catching a pop foul behind the plate and Carter, Miles and Ella Wood ended the inning with a 6-4-3 double play.
Appling got an unearned run in the sixth as all three runs in the game were unearned.
Sellers’ double was the top hit for the winners. Miles, Jaci Underwood and Maeleigh Burns added singles.
Poe pitched four innings, blanking Appling on two hits, two walks and one strikeout. Parlor pitched the final three innings, giving up an unearned run on one hit, no walks, and two strikeouts.
A four-run bottom of the fifth for Jeff Davis ended the Toombs game by the run rule.
The Lady Jackets struck early with a 3-run first and a 2-run second. That was more than enough to win with Parlor on the mound throwing a one-hitter. The JD bats came alive with 12 hits.
Parlor opened the bottom of the first with a double. Two outs later, Toombs committed two straight errors and JD had a 2-0 lead. Another error and defensive indifference put Poole on third base and Maeleigh Burns singled to right to drive in Poole.
Tia Cornish started the second with a single, stole second, went to third on a passed ball and scored on Bentlee Metts’ ground out. With two outs, Miles and Underwood hit back-to-back singles with Miles scoring to make it 5-0.
Jeff Davis got an unearned run in the fourth as Carter reached on a 2-base error. A Miles ground out pushed Carter to third and she scored on an Underwood sacrifice fly.
Two straight errors put the first two batters on in the Appling fifth. A two-out single scored the Lady Pirates’ two unearned runs.
The 4-run bottom of the fifth ended the game. Poole and Payton Thigpen opened the inning with singles and Bianca Torres moved the runners to second and third with a sacrifice bunt. Toombs booted a Cornish grounder to score two runs and Cornish made it all the way to third. Metts then doubled to score Cornish and Carter followed with a single to score Metts with the game-ending run.
Cornish and Metts each had a single, a double and two RBI, Carter had a single, a double and one RBI, Underwood had a single and two RBI, Burns singled and drove in a run, and Miles, Thigpen, Sellers and Poole each had singles.
Parlor gave up no earned runs on one single, two walks and four strikeouts.
As in the Toombs County game, a 4-run bottom of the fifth ended the game with Bacon County by the run rule.
The Lady Jackets started slowly, scoring only one run over the first three innings. But they scored four in the bottom of the fourth and four more in the fifth.
A hit batter and a pair of 2-out singles put Bacon on the board first with a 1-0 lead. But from there, Parlor allowed only one other baserunner on a harmless single in the third.
In the bottom of the first, Carter had a lead-off single, stole second, advanced to third on a fly ball and scored on a Sellers single to tie the game 1-1.
A 2-out rally in the fourth led to Jeff Davis picking up four unearned runs. The big hit in the inning was a 2-run triple by Miles. Underwood followed with a single to score Miles and Underwood stole second and scored as Sellers reached on an error.
Cornish led off the fifth with a walk, followed by singles by Torres and Thigpen to load the bases. A walk to Carter made it 6-1. Underwood then cleared the bases with a double to end the game with JD up 9-1.
Underwood led the batting with a single, a double and four RBI. Sellers singled twice and drove in a run, Miles tripled and had two RBI, Carter had a single and an RBI, and Torres, Metts and Thigpen each singled. Torres had two sacrifices.
The defense was flawless backing up Parlor who pitched five innings, giving up one run on three hits, hitting one batter, walking none and striking out four.
Score by innings:
ACHS    0    0    0    0    0    1    0    -1
JDHS    2    0    0    0    0    0    x    -2