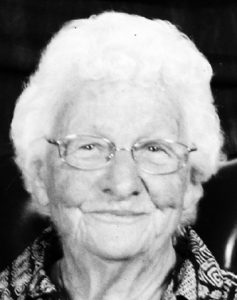 Mrs. Lula Bell McNeal Walker Nash, 91, of Baxley, passed away Sept. 28.
Mrs. Nash was born Oct. 6, 1928, in Jeff Davis County to the late Michael A. McNeal and the late Lula Kaiser McNeal. She was a homemaker, a charter member of Faith Baptist Church and a member of Woodmen of the World. Mrs. Nash was inducted into the Baxley-Appling County Sports Hall of Fame for her lifelong accomplishments in sports, including being a part of the Appling County State Basketball Championship Team. She continued in her love of sports, playing basketball until she was in her 60s and softball until she was 65. She also was a member of the bowling league until she was in her 80s.
In addition to her parents, she was preceded in death by her husbands, Vanlayer Walker and J. W. Nash; a son, Wilbur Walker; and a granddaughter, Melanie Crosby.
Survivors include her daughters and sons-in-law, Patricia Ann and Harold Strickland, Janice and Barry Branch, Evelyn Pfau and Dale Davis and Annette and Rickey Hunter all of Baxley; sons and a daughter-in-law, Rex Walker and Van and Lisa Walker Jr. all of Baxley; 16 grandchildren; 26 great-grandchildren; and six great-great grandchildren.
A graveside service will be held Sept. 30 at 3:30 p.m. at Omega Cemetery with the Rev. Gary Conger officiating and a eulogy by a granddaughter, Keely Thornton.
Active pallbearers will be Shane Crosby, Shawn Crosby, Josh Walker, Walker Rowell, Brett Nail, and Ryan Walker.
Honorary pallbearers will be all friends and family in attendance.
Swain Funeral Home is in charge.