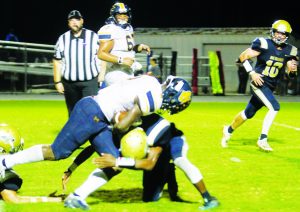 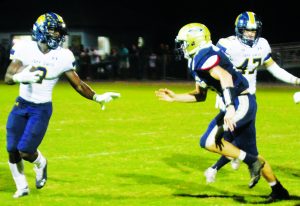 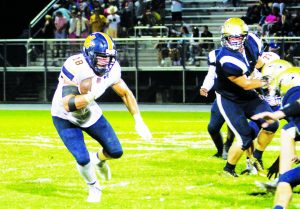 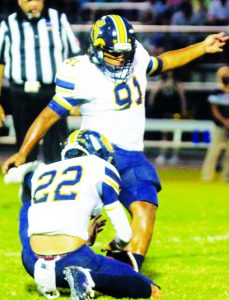 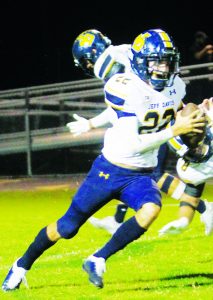 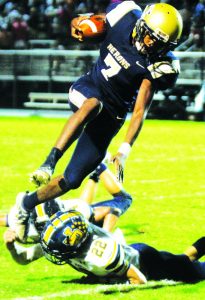 Chalk this victory up to the defense.
Jeff Davis High’s defense intercepted three Brantley County passes, returning two for touchdowns, as the Yellow Jackets took a 14-6 win over Brantley in Nahunta Friday night.
The win improved Jeff Davis’ record to 3-0 while the Herons fell to 0-3.
All three pickoffs came in the third quarter on three successive possessions as the JD offense ran only nine plays in the quarter. The defense, meanwhile, picked up 107 yards in interception return yardage.
Cade Walters picked off the first Heron pass on the dead run at the Brantley 17 and trotted untouched into the end zone. On the next possession, Brantley attempted to throw an across-the-field pass and when Austin Wood picked off the pass at the JD 25 he was all alone on the left side of the field, racing 75 yards untouched for the score. Late in the quarter, C.J Parker gathered in a tipped pass and returned the ball 15 yards.
Additionally, the defense kept the Herons bottled up most of the game. Other than Brantley’s scoring drive that began in the first quarter and ended in the second, and the third quarter drive to the Jacket 28 which ended in Wood’s interception return, were the only two serious threats mounted by the Herons in the game. Other than those two drives, Brantley’s deepest penetration was just across midfield to the JD 47. In the fourth quarter, with the Jackets clinging to a 14-6 lead, the Herons never crossed midfield.
Walters’ punting kept Brantley deep in its own territory for much of the game.
Compared to the Jackets first two games, the offense sputtered much of the evening. They made forays into Heron territory only twice in the first half, to the Brantley 30, missing a 47-yd. field goal attempt, and to the 39.
After Parker’s interception, which he returned to the Brantley 39, the JD offense drove to the Heron 7 where an interception killed the drive. And the game ended with the Jackets at the Heron 5.
On their first possession of the game, the Jackets quickly moved to the Heron 32 with Walters picking up 18 yards on a quarterback keeper and hitting Parker with a 14-yd. completion. But things stalled there and, on 4th-and-8 at the 30, Audiel Placencia tried a 47-yd. field goal with the kick long enough but wide left.
Late in the first quarter, Brantley began their scoring drive from their own 36. It took them 18 plays as the defense gave up yardage grudgingly. On 3rd-and-3 from the Jacket 11, the Heron quarterback was flushed out of the pocket and he scrambled for 11 yards and the touchdown. Wood broke through to block the extra point kick.
Jeff Davis had only two first downs in the second quarter, on a 14-yd. Walters-to-Parker pass and a 10-yd. run by Wood on an option play. Defensive linemen Andrew Aycock and Charles Stegall came up with a big defensive play in the quarter, with Aycock stopping the runner long enough for Stegall to grab the runner by the back of the shirt and sling him to the ground.
Trailing 6-0 at halftime, the Jackets took the second half kickoff and, thanks to a 17-yd. run up the middle by fullback James Wood, moved the ball to midfield from where Walter’s punt put Brantley at their own 14.
On the second play from the 17, Walters picked off the pass that put the Jackets on the scoreboard. Placencia booted the P.A.T. and Jeff Davis led for the first time, 7-6.
After the ensuing kickoff, the Herons quickly moved from their 29 to the Jeff Davis 25, mostly through the air. On 4th-and-5 from the 28, Austin Wood got his interception and Placencia made it 14-6.
After Placencia’s kickoff sailed into the end zone, Brantley moved from the 20 to the 45 where, on 1st-and-10, James Wood blew in from his defensive end position and nailed the Heron quarterback for a 7-yd. loss. Two plays later, Parker gathered in the tipped pass and returned it from the Jeff Davis 46 to the Brantley 39.
On the first play after the turnover, Walters hit Parker again, this time for 10 yards. Two plays later, Aahiyus Allen broke lose for an 18-yd. run to the Heron six. But the Jackets could get no closer than the seven from where Walters’ pass was intercepted.
Brantley moved the football from their six out to the Brantley 47 where, on 1st-and-10, freshman linebacker Carter Mullis came up with a big defensive play, his second of the drive, to nail the runner for a 4-yd. loss. Two plays later, Austin Wood almost came up with his second interception of the game but he couldn’t hold onto the ball. From the BC 45, Brantley punted the ball away and the Jacket offense began running down the fourth quarter clock.
Austin Wood got the ball five out of the next six plays, picking up a total of 42 yards as JD moved the ball to the Brantley 44. From there, Walters punted the Herons into a hole at their own seven. On 4th-and-10 they punted the ball away.
From the Heron 34, Austin Wood picked up nine, Allen 18 and Austin Wood two to the five where the game clock clicked down to zero.
Unofficial statistics had Austin Wood with 57 yards on eight carries, James Wood with 55 yards on nine carries, Allen with 35 yards on eight tries, Walters with 32 yards on three carries and Landon Roberson with two yards on two carries.
Walters completed 3-of-9 passes, all to Parker, for 38 yards.
Walters averaged 38 yards on four punts.
Unofficial Statistics
JD    BC
1st Downs    11    14
Rush-Yds.    30-181    29-100
Pass Yds.    38    122
Total Yds.    219    222
Att/Com/Int    9/3/1    25/15/3
Pen-Yds.    8-84    11-80
Punt-Avg.    4-38.0    5-31.3