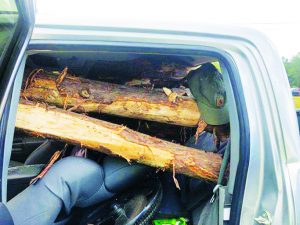 Nineteen-year-old Jordan Ray Breedlove of Hazlehurst miraculously survived a horrific accident Friday afternoon when the 2015 Toyota Tacoma Double pickup ran into the back of a  log truck loaded with logs.
The logs penetrated the windshield of the Toyota and went completely through the cab of the truck.
According to a Georgia State Patrol report, both vehicles were traveling south on Georgia 27 (Lumber City Highway) with Breedlove following too closely. A witness to the accident told a State Patrol investigator that the pickup truck did not appear to slow down before striking the rear of the log truck.
Breedlove was transported to Jeff Davis Hospital by the Jeff Davis Emergency Medical Service and later transferred to another hospital for treatment.
The driver of the log truck, Charles Allen of Hazlehurst, was not injured in the accident.