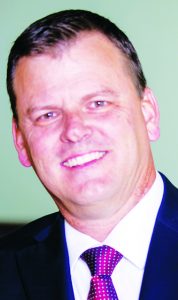 Eric Smith, Georgia Power Local Manager, was recently named the Chairman of the Hazlehurst-Jeff Davis Chamber of Commerce Board of Directors. Eric and his wife Laura live in McRae.
Eric grew up in Alamo and graduated from Wheeler County High School. He worked with Benchmark Fabricating in Dudley and Little Ocmulgee EMC before beginning his career with Georgia Power 17 years ago. He was promoted to Local Manager three years ago. In his position he serves Coffee, Jeff Davis, Telfair and Wheeler counties.
Eric and Laura have four children together: Grace (1990-2013), Jesse, Jared, and Alese. They most recently became grandparents to a beautiful baby boy.
Eric and Laura are most known for the non-profit organization they started after they lost their 23-year-old daughter Grace in 2013. After that devastating blow, they adopted the phrase “Panda On!” to remind them and their family of Grace’s love of panda bears and that you can’t stop living, you can’t stop loving and you can’t stop moving forward.
Eric is one of the Chamber’s most active volunteers. He will most often be seen setting up tables and chairs and helping the Chamber staff plan events alongside them. When he isn’t volunteering, Eric enjoys spending time with his family, golfing and kayaking in his spare time. He is also currently serving as President of the Jeff Davis Rotary Club.
“Working with the Chamber allows me the opportunity to be involved with the local community by helping to promote individual businesses while also strengthening networking relationships among the members,” said Eric. “It’s a great way to give back to the community and represent Georgia Power.”