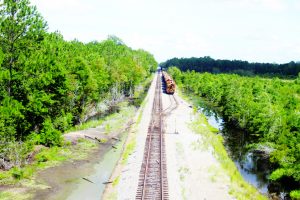 The view from atop the overpass looking toward Graham 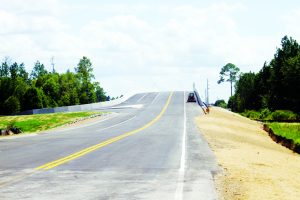 View of the overpass from Jarman Street 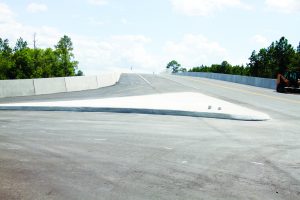 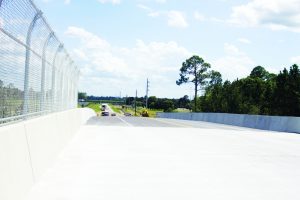 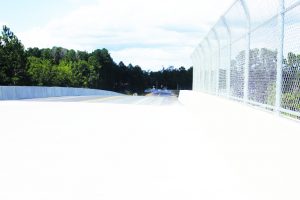 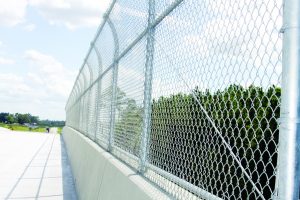 Security Fence Runs The Length Of The Overpass

On June 4, 2019, state officials joined Hazlehurst City Council and Jeff Davis County Commission officials for the groundbreaking ceremony marking the start of construction of the Hazlehurst overpass.
It was the start of a dream decades in the making, primarily by city officials who, since the 1970s, have lobbied the Georgia Department of Transportation about the need for a bridge over the railroad tracks that bisect the city. For decades, at times the city was paralyzed by train delays — most importantly, separating the north side of Hazlehurst from the hospital and the then-only fire station in Hazlehurst on the south side. Emergency situations were jeopardized by sometimes long waits for trains to clear the roads for traffic to flow.
This morning (Wednesday) at 10, 14 months and a day from that 2019 groundbreaking ceremony, officials gathered once again, this time for a ribbon-cutting ceremony to mark the completion of work on the overpass and opening the bridge to traffic.
It has been a long 14 months for motorists in Hazlehurst as traffic normally using Larry Contos Blvd., aka Hollingsworth Blvd., aka “The Bypass,” have been detoured through the center of Hazlehurst. Tractor-trailers that normally bypass the crowded downtown area by using Larry Contos Blvd. were forced into the downtown area.
When the bypass reopens, 14 months of traffic congestion will be eased considerably as life returns to normal.
It is an especially happy time for residents of the North Gill Street area and the Altamaha section of the county, as the intersection of Gill and Jarman streets has been decidedly more dangerous while the overpass was under construction.
The project took about a month longer to complete than originally thought. When McLendon Enterprises Inc. began work on the $6.35 million overpass project, the tentative time frame for work was 395 days. Aug. 5, 2020, is 427 days since the June 4, 2019, groundbreaking.