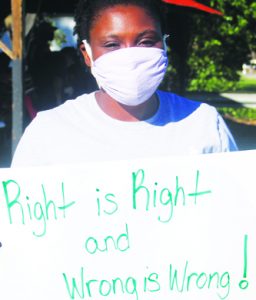 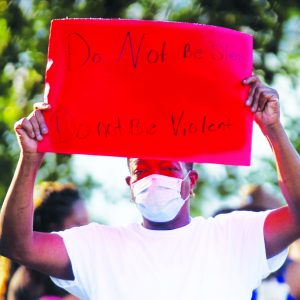 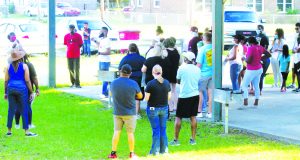 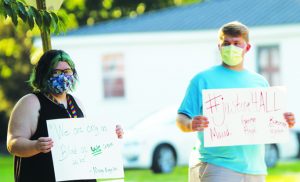 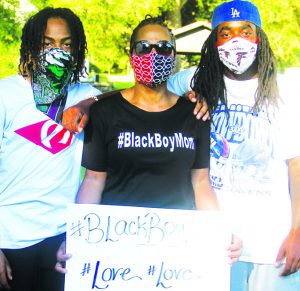 It was billed as a “peaceful protest” through which members of the community could show their support, empathy and desire for justice for Ahmaud Arbery, Breonna Taylor and George Floyd.
Those three names have been spotlighted across the country and throughout the world in recent weeks. Aubrey was shot to death during a citizens’ arrest in Glynn County, Ga., Taylor was shot by plainclothes police officers in her Louisville, Ky., apartment, and Floyd died during a Minneapolis, Minn., arrest when a police officer held his knee on Floyd’s neck, strangling the suspect.
All three victims were black and the tragedies have led to riotous protests in cities across the nation.
But Sunday evening’s event in Hazlehurst was quiet, orderly and respectful, and protest organizer James Earl Cray made sure the event was like that. Cray, pastor of Empact Church in Hazlehurst and a football standout during his years at Jeff Davis High School and Troy State University in Alabama, had helpers to hand out flyers to the 60 or so participants to explain the purpose and scope of the protest, with emphasis on the fact it would be a “peaceful protest.”
The event began at Mary McLean Park where participants were given Coronavirus masks or brought their own. Some came with pre-made signs and others made their signs at the park where poster boards and markers were provided. Cray opened the event with a short speech to set the tone for the protest.
The group then lined up along the side of Dr. Martin Luther King Jr. Drive for a few minutes and then marched to Coffee Street where they positioned themselves along the side of Highway 341 and quietly stood in solemn unity.
Following is the wording on the flyer:
JUSTICE FOR ALL
“Saving Our Sons & Daughters”
Purpose:
The “peaceful protest” is NOT to riot but it’s to show our support, empathy and desire for justice for the lives of Ahmaud Arbery, Breonna Taylor and George Floyd.
This “peaceful protest” is to send a message to our community that we will stand in unity to do everything in our power to prevent theses acts of injustice from happening in our community.
This “peaceful protest” is to inform and educate our sons and daughters on the issues surrounding them in this country.
This “peaceful protest” is to offer individuals the opportunity to be heard and be seen supporting each in our community.
“Injustice Anywhere Is A Threat To Justice Everywhere.”