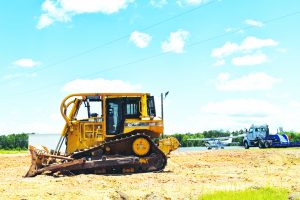 By
MARY ANN ANDERSON
In the early 1960s, Hazlehurst businessman and industrialist Claude Cook cobbled together enough local support and financial backing to build Hazlehurst’s first – and as of today – only public airport.
As recent projects continue to improve Hazlehurst Municipal Airport – a parallel runway, repaving, new lighting, fencing and runway extensions among them – it has grown far beyond anything Cook probably ever imagined when it was little more than an airstrip and hangar surrounded by dense pine forests. With an influx of locally-owned private aircraft using it as a home base and a surge of nonlocal aviation traffic making fuel stops, the airport is always busy.
With almost every recent airport project funded by grants from the Department of Transportation and Federal Aviation Authority, the City of Hazlehurst, who owns the airport, must make a match of anywhere from 5 to 10 percent of the total grant, either with cash or in-kind contributions.
One of the latest, and much anticipated, projects to land at the airport is the building of a new corporate hangar to supplement its almost two dozen existing hangars, every single one of which is now rented.
“It’s just one of several new corporate hangars that are needed in Hazlehurst now,” says Mayor Bayne Stone.
That project, too, will require federal and state grants to complete, which means the City must meet those matches as well. And it is Cook’s grandchildren who are making that possible by providing infrastructure work necessary to prepare the land for the hangar.
The new hangar site, just to the west of the existing terminal, was flush with pines, stumps and other undergrowth that needed clearing and leveling. That work was done with equipment, labor, material and time provided by Bobby Sears, Cook’s grandson and son of Saralyn Cook and the late Bob Sears, and John Morris, who is married to Bobby’s sister, Ashley Sears Morris.
The project, Stone explains, was enough to satisfy the local match for the grants the city is applying for as an in-kind contribution with an estimated worth of at least $30,000 to $40,000.
In the shadows of the terminal, Stone walks around the site where the new hangar is to be built, where the Sears and Morris-owned bulldozers and trucks have smoothed out the red clay and pushed away the few remaining stumps to make way for the concrete flooring of the hangar.
“We’re so grateful here at the city for Bobby Sears and John Morris, as we could not get the grants without their help,” Stone says. “In this way, Claude Cook is still giving to the City of Hazlehurst. His legacy is still contributing to the airport he helped build.”

Seven new Hall of Famers to be inducted

Board has called meeting