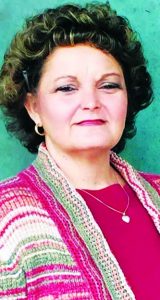 Rhonda McCarty Walsh is seeking the seat of Altamaha Commissioner in the upcoming Primary Election which has been postponed until June 9 due to COVID-19.
Four years ago, Mrs. Walsh fell short in the December Run-Off Election after being the top vote getter in the May Primary and November General Election. Mrs. Walsh is a lifetime resident of Jeff Davis County along with her husband of 30 years. They are the founders of R&D Auto-Truck Salvage on the Baxley Hwy. They have three beautiful children, Roxie, Dylan, Mallorie a precious granddaughter, Teagan Walsh. While Mrs. Walsh doesn’t have true political experience, she will bring the demanding experience of owning and operating a family owned business from a young age.
“Serving the citizens from a Commissioner’s point of view is much the same as pleasing our customers by assessing the situation, listening to their needs and making a fair decision without further delay,” she said.
Mrs. Walsh believes she has shown her commitment attending most of the City and County meetings over the past eight years. She may not have been elected four years ago, but that did not deter her in her efforts to continuously be a voice for the people of Altamaha. Through her constant attention, at council meetings, she has gained valuable information to help her succeed at bringing unity and positive change to her hometown.
“What can I do to make this county a better place to live for you?” she said, “As a commissioner candidate I am seeking your input. Feel Free to call me 912-240-4920 I’ll be happy to speak with you.”
“On March 19 before the Governor’s Shelter in Place Order, I decided not to go door to door campaigning. I hope you understand and agree with that decision,” she said.
The 2020 Altamaha Commissioner race will be decided June 9 as the only two candidates are Republicans.
Mrs. Walsh urges everyone to register to vote if not registered. Stay alert to date changes as the last day to register to vote has been moved to May 11. Early voting begins May 18. Requests for absentee ballots have already been mailed out to every registered voter, if you prefer to vote via paper ballot.