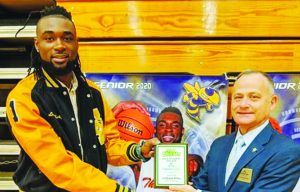 Ja’Queze Kirby didn’t need a big senior season at Jeff Davis to secure a college scholarship. His talents and his strong play for the Yellow Jackets the past three seasons, along with his performance in AAU ball, had already been enough to convince colleges that he could play big-time college basketball.
And before he took the floor for the Jackets this year, Kirby had already decided to pursue a collegiate career at Ohio Valley Conference power Murray State following what has been a stellar four years at Jeff Davis. But Kirby has certainly left no doubt that he’s worthy of his scholarship with one of the best seasons of any player in Southeast Georgia and really the entire state, too.
The Jeff Davis standout is scoring 19.2 points a game while averaging 11.4 rebounds to go with 4.6 blocks, 4.2 assists and 3 steals a contest. His consistent play, which has spanned the season, earned Kirby the first Coastal Pines Technical College Boys Student-Athlete of the Month for January. The award is presented by 912 Sports and was given to Kirby Feb. 5 at school.
“Ja’Queze is a joy to coach,” said Jeff Davis coach Bo Boatright. “He has been the catalyst of our team for a while now. He has an energy on the court that is uncommon. Mix that with tremendous athleticism and an ever-growing skill set and you have something very special.”
Kirby, who stands 6-foot-6, is listed as a guard and forward on the roster for the Jackets. And, he will go down as one of the all-time best players to ever suit up for Jeff Davis, regardless of position.
He has already surpassed the 2,000-point mark in his four-year career with the Jackets and has 1,500 career rebounds.
Kirby figures to be a four-time all-state player after having already won those honors his first three seasons. Just this week, he was named the Region 2-AA Player of the Year for the second consecutive season. He also will be a candidate for the Class AA Player of the Year, an honor he received last season, too.