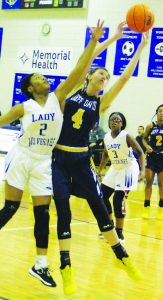 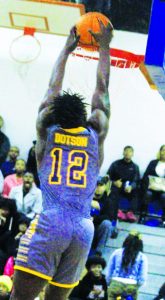 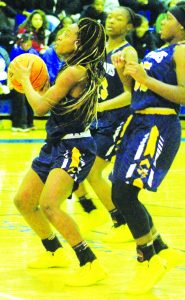 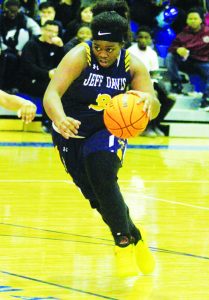 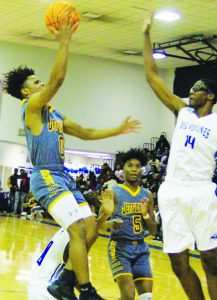 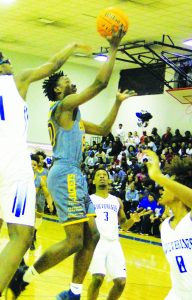 When Jeff Davis High and Woodville-Tompkins basketball teams met in Hazlehurst Jan. 10, the visiting Lady Wolverines routed the Lady Jackets 60-23 and the Jacket boys rolled over the Wolverines 70-39.
Last Friday night in Savannah, it was the Lady Jackets taking a 41-29 victory — a 49-point turnaround — and the Wolverine boys rolling to a 79-41 win — a 69-point turnaround.
Coach Niki Perry’s girls’ turnaround can be attributed to much improved play by the Lady Jackets. Coach Bo Boatright’s boys’ turnaround can be chalked up to the loss of C.J. Parker for the year due to an injury and foul trouble for leading scorer, rebounder and blocker Ja’Queze Kirby.
The JD girls finished the regular season with a 17-8 record and the No. 4 seed entering this week’s Region 2-AA tournament. The boys finished at 18-7 and are seeded No. 2. The girls play tonight (Wednesday) at the tournament in Metter while the boys received a bye and will play Friday night.
The girls started last week on Monday night as they hosted St. Vincent’s Academy, outscoring the Saints in every quarter to roll to a 52-32 victory.
Morgan Yearty and Jekiya Smith paced Jeff Davis with 14 and 13 points respectively. Jakhia Greene had eight, Dee Wooten six, Keke McDuffie five, Serenity Carter and Tia Cornish two each, and Tonia Hall and Sherandi Fuller one each.
Tuesday in Alma, the girls jumped out to a 24-7 halftime lead and coasted to a 53-39 win over Bacon County.
Smith and Greene both scored in double digits with 15 and 14 respectively. Yearty added six, McDuffie three and Hannah White two.
Friday in Savannah, the Lady Jackets ended the season with a 4-game winning streak with the victory over Woodville-Tompkins.
Yearty was the only player in double figures with 10. Greene scored nine, including going 7-for-8 on free throws in the fourth quarter, Wooten also had nine, McDuffie and Carter five each, and Smith three.
In boys action last week, the Jackets took a hard-fought, 66-60 win over a much improved Bacon County team. Jeff Davis led 32-19 at halftime but the Raiders out-scored the Jackets 41-34 in the second half to make the game closer.
Four Jackets scored in double figures. Kirby had 23, Mike Dotson 14 — 10 of which came in the opening quarter — Ti King had 13 and Brandon Sturgis 10. Bran Swain, T.J. McMillian and Tre Chandler rounded out the scoring with two points each.
At Woodville-Tompkins, Kirby got in foul trouble in the second quarter and the Wolverines were able to pull away late to a 25-17 halftime lead. With Kirby benched with four fouls for almost the entire third quarter, Woodville-Tompkins out-scored the Jackets 29-11 to build a 54-28 lead. They continued to added to the lead in the final quarter to take the 79-41 victory.
Kirby, who scored nine points in the first half, managed only five free throws in the second half to lead the Jacket scoring with 14. Sturgis had 10, Dotson seven, Chandler five, Swain three and King two.
Score by quarters:
Girls
SVA 7 5 7 13 -32
JDHS 14 11 13 14 -52