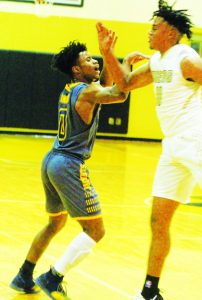 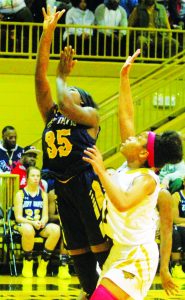 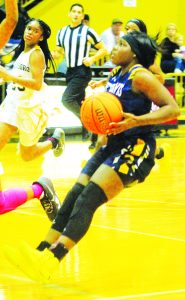 Jekiya Smith pulls up for a shot 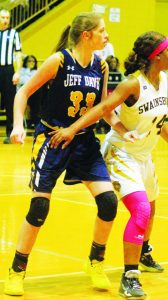 Kelsey Parlor positions for a rebound

Jeff Davis High’s boys team had its 7-game win streak snapped in a big way Friday in Swainsboro as the Tigers rolled to a 97-53 win in a game that wasn’t as close as the final score indicated.
Meanwhile, the girls got a big win over Swainsboro 37-31 and added a 52-32 victory over St. Vincent’s Academy Monday to get solid control of the No. 4 seed in the region.
Last Tuesday, the JD boys avenged their only region defeat of the season with a 66-53 home victory over Vidalia. The girls dropped their contest to the visitors 45-42.
In the JD-Vidalia girls game, the Lady Indians established a big first quarter lead but the Lady Jackets rallied in the second stanza and trailed only 23-22 at intermission. The teams entered the final quarter knotted at 36-all but Vidalia came through down the stretch.
Jakhia Greene was the only Jeff Davis player in double figures with 14. Jokiya Smith had seven, Keke McDuffie and Morgan Yearty six each, Dee Wooten five and Serenity Carter four.
Vidalia’s Jashiyah Jones led all scorers with 24.
In Swainsboro, Jeff Davis won each of the first three quarters to take a 6-pt. lead into the final quarter and that lead held up in the 37-31 win.
Greene again scored in double digits with 12, Yearty had nine, Smith seven, Carter, Bryce Williams and Kelsey Parlor two each, and Wooten and Sherandi Fuller each hit a free throw.
J. Murphy topped Swainsboro with 15.
Vidalia, a 16-6 team, has a solid boys squad so when the hustling Yellow Jacket defense held the Indians scores for more than 12 minutes, it opened a lot of eyebrows. Jeff Davis led 11-0 at the first stop and 26-9 at intermission. While Vidalia outscored the Jackets by four in the second half it wasn’t enough to erase the 17-pt. halftime deficit.
While the defense was the big story in the game, four JD players hit in double figures. Ja’Queze Kirby had 19, Bran Swain had his top scoring performance of the year with 16, Ti King added 15 and Brandon Sturgis got an even dozen. T.J. McMillian and Mike Dotson rounded out the scoring with two each.
Ty Dalley led Vidalia with 21 and Matt Hill chipped in 10.
The No. 1 rule to attack a 3/4 court zone press is never, ever take the ball to the sidelines. Apparently, Friday in Swainsboro, the Jackets had never heard that rule and, time after time after time they violated the rule and the results were predictable.
Swainsboro made steals with alarming regularity, well into the double digits in the first half alone, and the Tigers responded by hitting layup after layup.
Swainsboro put a whopping 35 points on the board in the first quarter alone to take a 26-pt. lead. By halftime, it was 57-24 and entering the final quarter, the Jackets trailed by a whopping 56 points.
The Tiger coach emptied his bench in the fourth quarter and Jeff Davis was able to cut 12 points off the final margin.
King and Kirby hit in double figures with 15 and 12 respectively. McMillian had seven, Dotson and Carson Galbreath five each, Sturgis four, Tre Chandler three and Jacob Wilcox two.
Immanuel Hackett and Fred Seabrough led Swainsboro with 22 and 20, Artis Kingsbury had 18 and Cedric Seabrough 11.
Score by quarter:
Girls
VHS 15 8 13 9 -45
JDHS 4 18 14 6 -42