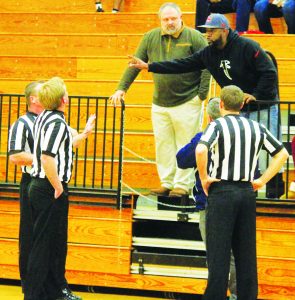 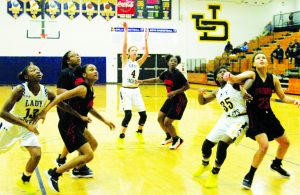 The Lady Jackets basketball team won two of three games last week but, with Swainsboro winning three Region 2-AA games, the Lady Tigers moved past Jeff Davis into fourth place in the region standings.
The Lady Jackets are 4-4 in the region and 11-6 overall while Swainsboro is 5-4 and 8-7.
The JD wins came last Tuesday over Bacon County 43-38 and Saturday in Baxley with a 32-12 victory over Appling County. Friday in Hazlehurst, Woodville-Tompkins rolled to a 60-23 win over the homesteading Lady Jackets.
Against Bacon, Jeff Davis trailed 27-24 at intermission and went into the fourth quarter with the game tied 32-all. The Lady Jackets took an 11-6 edge in the final eight minutes to win 43-38.
Jakhia Greene was the only JD player in double digits with 11. Keke McDuffie and Morgan Yearty had nine each, Tania Hall six, Jekiyah Smith four, and Tia Cornish and Sherandi Fuller two each.
Shalynn Barnes had 15 for Bacon and Takari Renwick added 10.
After trailing only 11-9 after one quarter against Woodville-Tompkins, the Lady Jackets took it on the chin the rest of the way as the Lady Wolverines pulled away to the 60-23 win.
Greene again led the scoring with nine points. McDuffie had six, Analese Poole four, and Yearty and Hall two apiece.
Woodville-Tompkins had four players in double figures led by Jaliyah Hayward with 12. Jada Grayson, Tabitha Deal and Jaliyah Castle all had 10 points.
Appling County’s girls are a low-scoring team as 33 points is the most the Lady Pirates have scored in any game. Appling’s 12-point total against the Lady Jackets was the second straight game they have managed only a dozen points.
JD hasn’t had to score many points in its two games against Appling, winning 31-22 in December and 32-12 Saturday, well below their 39 ppg average.
McDuffie and Smith led Saturday’s win with 12 and 10 points respectively. Yearty had six and Greene and Serenity Carter two apiece.
Harmony Dicker’s four points topped Appling.
Score by quarters:
BCHS 10 17 5 6 -38
JDHS 11 13 8 11 -43