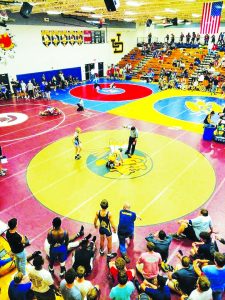 The first weekend of December, the Jeff Davis High School wrestling team hosted the 13th annual Yellow Jacket Duals, the largest in the history of the tournament with 28 teams.
Schools came from as far north as Loganville near Athens, as far south as Berrien County, as far east as Islands High School in Savannah, and as far west as Turner County, even including a team from South Carolina (Lexington High School).
In the tournament were 12 state qualifying teams from this past year, and Lexington was a top 10 team in South Carolina.
The tournament started Friday at 4 p.m. and finished Saturday at 4 p.m. Some teams spent the night while others traveled back and forth.
On Saturday the wrestling program hosted the 5th annual JV Stinger Slam. Fifteen teams competed year also making it the biggest one yet.
This year the event ran 10 mats, utilizing both the high school and auxiliary gym on the high school campus, and running three mats at the middle school for the JV tournament.
The winner of the varsity tournament in the gold bracket was Oglethorpe County. The Yellow Jackets finished 2nd in the silver bracket behind Toombs County.
The wrestlers and coaches thank everyone for the support and help to make this year a success.
This past weekend the Yellow Jackets competed in the West Laurens Invitational.
The team finished 5th.
Individual placers were Javorian Coleman 4th, Jerry Hampton, Isaiah Robinson, Caleb O’steen all placed 3rd, and finishing as runner-ups were Billy White and Bradley Owens.
Jeff Davis Wrestling will send teams to compete this weekend in Loganville and Treutlen County.