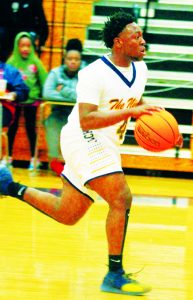 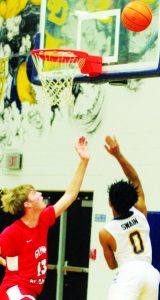 Bran Swain scores on a layup

Ja’Quez Kirby brings the ball up the court 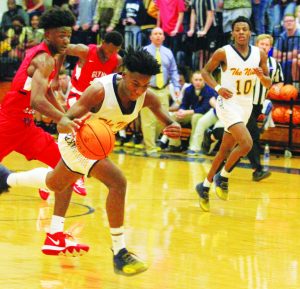 Ti King on the attack

During last year’s JDHS boys basketball season, 2018-2019 Georgia Class AA Player of the Year Ja’Queze Kirby had to carry a big load for the young, inexperienced Yellow Jackets.
Through two games this year, Kirby has had a load lifted off his shoulders and he’s able to play more relaxed than at almost any time last season. That’s because he’s surrounded by much more experienced teammates who have more than carried their load.
As a result, Kirby is scoring less but he’s stepped up his defense and play-making a notch. In the opening game against Glynn Academy in the Hugh McBride Showcase tournament, Kirby led the JD scoring with a relatively low output of 14 points, while his defense and shot-blocking prowess kept the Red Terrors off balance.
And he had plenty of scoring help as C.J. Parker and Ti King had 14 and 13 points respectively as the Jackets won 56-52.
In Monday’s game, Long County gave the Jackets a battle and led 48-47 entering the final quarter. That’s when King, Parker, Kirby and Bran Swain used a balanced scoring attack to out-score Long 17-10 over the final eight minutes to win 64-58. All four of those Jackets scored in double figures for the game, led by Parker with 17.
With the new-found balance this season, Coach Bo Boatright’s Yellow Jackets were ranked No. 8 in Class AA after Week 3 of play.
And the Jackets (2-0) are in a tough region as 2-AA’s Vidalia (4-0) is No. 3, Woodville-Tompkins (3-1) is No. 7 and Swainsboro (2-0) is No. 9. Swainsboro and Woodville-Tompkins played each other last night (Tuesday) in Savannah.
In Saturday night’s Jeff Davis-Glynn Academy game, the Jackets pulled away late in the second quarter to claim a 30-25 halftime lead and then held off the Red Terrors in the second half.
Kirby, Parker and King each had a 3-pt. shot for their 14-, 14- and 13-point performances. Mike Dotson and Brandon Sturgis both had six and Swain added three. Most importantly, five Jackets scored in the fourth quarter as their balanced attack held off a Glynn comeback bid.
For Glynn, Tray Dickens had 13, Max Harlicka 12 and Quay Dickens 10.
Against Long, the Blue Tide led throughout the first three quarters, and held a 48-47 advantage entering the fourth quarter.
In the last stanza, King scored six, Swain and Kirby four each and Parker hit a 3-pt. shot as the Jackets came from behind for the win.
Parker’s 17 points, which included three shots from beyond the arc, led the JD scoring. Kirby had 15, including a 3-pt. shot, King 14 and Swain 10. Dotson and Sturgis rounded out the scoring with four points each.
Tostadas Pouncey hit five 3-pt. shots en route to scoring 17 points for Long. Trajan Weatherspoon had 12.
Score by quarters:
GA 16 9 11 16 -52
JDHS 15 15 10 16 -56