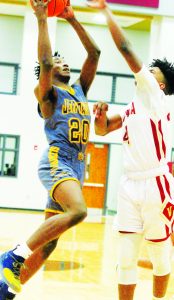 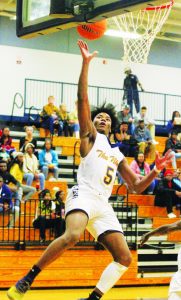 Jeff Davis High’s boys basketball team faced a formidable challenge last week, facing three ranked teams with a combined record of 18-1.
While the Jackets lost two of the games to fall to 7-2, they showed they could definitely play with some of the best teams in the state.
After falling to 5-1 Vidalia 51-47 Tuesday in Vidalia, JD knocked 6-0 Swainsboro from the unbeaten ranks 71-68 Friday in Hazlehurst.
And Saturday night, the Jacket gymnasium was packed with what was probably the biggest crowd to ever watch a JDHS game in the gym. The 1,200 seats were almost all taken and the walkways above the stands were two deep with watchers. Undefeated (7-0) and ranked No. 1 in Class A in the state, Treutlen County survived a scare by the skin of their teeth, winning 70-68 after trailing throughout the game.
The Yellow Jackets of Coach Bo Boatright could have won all three games.
Against Vidalia, they were unable to crack the Indians’ three-quarter court zone press and found themselves trailing by 13 at halftime, 31-18. They did better in the second half and narrowed the final deficit to four points.
Against Treutlen, the Jackets led 53-50 going into the final eight minutes. But down the stretch, they couldn’t buy a free throw while the Vikings couldn’t miss. In the fourth quarter, Jeff Davis made only 2-of-9 charity tosses while Treutlen made good on 8-of-10. That was the difference in the ball game.
Senior Ja’Quez Kirby scored 43 points in the three games and put on a shot-blocking show each game. Junior Ti King had 45 and sophomore C.J. Parker tallied 58. All three were in double figures in each game and Mike Dotson’s 10 points against Swainsboro gave the Jackets four players in double digits.
Kirby had 18, Parker 13 and King 10 in the Vidalia game. Parker’s three straight 3s in the third quarter was key in cutting the 13-point halftime deficit down to seven.
But Vidalia hit nine three-pointers for the game to account for more than half their 51 points. Those nine extra points were more than enough to claim the victory.
Dotson was the only other JD player to score with six points.
Against Swainsboro, the Jackets spotted the Tigers to a 16-11 lead in the first quarter. After tying the game 26-all at intermission, Jeff Davis took a 27-17 third quarter advantage to lead 53-43, with Parker getting 16 of the 27 points, including a pair of shots from beyond the arc. Swainsboro battled back but it was too little, too late.
Parker finished with 25, King 17, Kirby 12, Dotson 10 and Brandon Sturgis five.
The crowd at Saturday’s finale was not only large, it was loud. Treutlen brought the largest group of visiting fans to Hazlehurst in years, if not ever. And there was plenty to cheer about on both sides of the gymnasium as players from both teams put on a classic display of basketball skills.
After the Jackets led 35-32 at halftime, problems started for the Jackets in the third quarter as both Kirby, the Jackets’ top defender and shot blocker, and Parker, who was the leading Jacket scorer in the game, were whistled for their third fouls and went to the bench.
But King, Dotson, Sturgis, Bran Swain and T.J. McMillan kept the Jacket surge going and displayed the depth of the Jacket bench. When Kirby and Parker returned to the floor, the Jackets still had their 3-point lead as the two teams tied the period 18-18.
Then came the free-throw drought that enabled Treutlen to pull out a come-from-behind victory.
Parker had 20 for the night, King 18, Kirby 13, Dotson six, Sturgis and Swain four each, and McMillan three.
This week, the Jackets (7-2) play Clinch County (2-0) Thursday, Bradwell Institute (2-8) Friday and Ware County (0-8) Saturday in the Ware County Holiday Tournament in Waycross.
Score by quarters:
JDHS 4 14 14 15 -47
VHS 16 15 8 12 -51