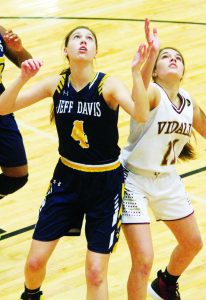 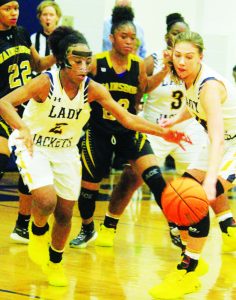 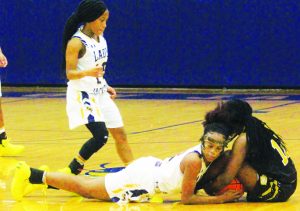 Jeff Davis High’s girls saw their 5-game unbeaten streak come to an end last Tuesday in Vidalia as the Lady Indians took a 54-35 win over the Lady Jackets.
And the next day, the 5-game win streak turned into a 2-game losing streak as JD fell to St. Vincent’s Academy 39-37 in Savannah.
But Coach Niki Perry’s Lady Jackets bounced back to take home wins Friday and Saturday with a 28-26 region victory over Swainsboro and a 58-26 non-region win over Treutlen County.
Jeff Davis now stands at 3-2 in region play and 7-2 overall. Vidalia improved to 5-1, 8-2, St. Vincent’s went to 2-5, 3-5, Swainsboro dropped to 2-3, 3-5 and Treutlen fell to 0-3, 0-7.
Tuesday in Vidalia, Vidalia broke away from a 10-10 tie at the end of the first quarter to a 26-15 halftime lead which continued to grow through the second half, primarily thanks to some hot 3-pt. shooting.
Jakhia Greene and Tia Cornish led the Lady Jacket scoring with eight points each and Keke McDuffie was close behind with seven. Jekiyah Smith had five, Dee Wooten four and Tania Hall hit a 3-pt. shot.
The St. Vincent’s game was close from start to finish. The visiting Lady Jackets held a 30-27 lead going into the final quarter when the Saints outscored JD 12-7 to take the 39-37 victory.
Wooten was the only Jeff Davis player in double figures with 10 each. Morgan Yearty and Smith had eight each, McDuffie seven, and Cornish and Greene two each.
Friday’s game in Hazlehurst started out as a blow-out as the JD defense held the Lady Tigers scoreless in the first quarter and allowed only three points in the second as Jeff Davis held a 14-3 halftime lead in an extremely low-scoring half.
Swainsboro out-scored Jeff Davis 23-14 in the second half to make the final score close.
Cornish and Wooten topped Jeff Davis with six points each, Smith, McDuffie and Greene had four apiece, and Hall and Yearty had two each.
Winless Treutlen presented little challenge to the Lady Jackets Saturday night as JD pulled away steadily to a 49-17 lead after three quarters. The Lady Vikings rebounded somewhat in the final quarter to make the score more respectable.
McDuffie scored eight of her team-high 10 points in the first quarter with a pair of 3-pt. shots. Wooten added nine, Smith eight, Yearty, Cornish and Kelsey Parlor six each, Greene four, and Analese Poole and Bryce Williams two apiece.
Score by quarters:
JDHS 10 5 9 11 -35
VHS 10 16 15 13 -54