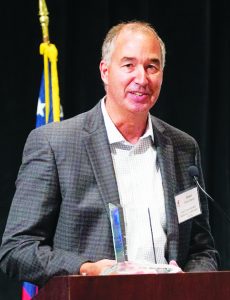 Henry Grant Gainer, Chairman of the Joint Development Authority of Jeff Davis County, Hazlehurst, and Denton, was named the 2019 Volunteer of the Year by the Georgia Economic Developers Association (GEDA) on Monday at its annual awards banquet.
Selected by GEDA’s Board of Directors, after being nominated by Andrea Taylor, CEO of the Hazlehurst-Jeff Davis Chamber and JDA, Mr. Gainer has been the key leader in economic development for over 20 years in Hazlehurst-Jeff Davis County. He has repeatedly negotiated with companies and community leaders to attract investment and jobs to Jeff Davis County. Gainer is active on many other organizations and boards of partner organizations in the community. He has voluntarily served as Interim CEO of the JDA several times in the absence of a director. Some of the companies assisted by Mr. Gainer include Silicon Ranch, FRAM, SunOne Logistics, EP American Footwear and Arising Industries.
Mr. Gainer was present at GEDA’s November Annual Awards luncheon in Atlanta, along with friends and community supporters, to receive the Volunteer of the Year award. Gretchen Corbin, President & CEO of the Georgia Lottery Corp. presented the award to Gainer. More than 300 economic developers from around the state attended the luncheon to honor Mr. Gainer and others.