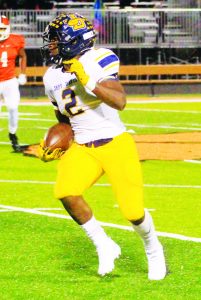 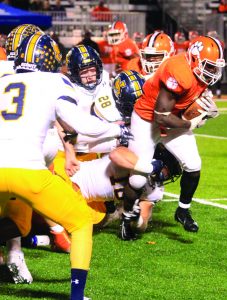 Darrell Mincey and James Wood bring down a Tiger runner 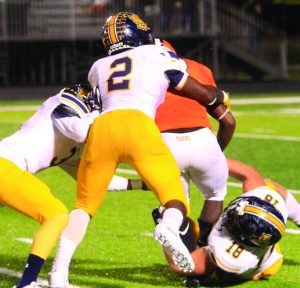 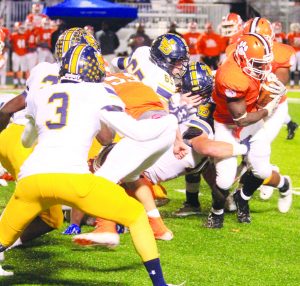 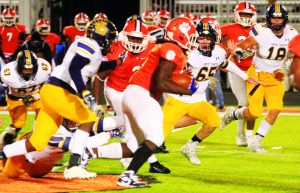 Chasing down a Metter runner 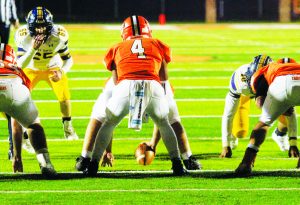 The Jackets had Metter backed up deep into their own territory

A late score by Metter High School dashed Jeff Davis High’s hopes for a spot in the 2019 state playoffs last Friday as the Yellow Jackets fell 15-12 to the Tigers in the final regular season game.
The win gave Metter a 9-1 record, good enough to win the Region 2-AA championship. Jeff Davis fell to 7-3 and finished fifth in the region standings. Toombs County, Swainsboro and Vidalia got the other playoff spots.
The Jackets fell behind 7-0 in the early going but rallied to take a 12-7 fourth quarter lead only to have Metter score with just over two minutes to play.
Metter scored on its first possession and were held at bay by the Jacket defense until late in the final quarter.
Metter kicked off to start the game and a penalty, a run for a loss and a quarterback sack backed up the Jackets, forcing Cade Walters to punt from deep in his own territory. Metter’s first possession started at the JD 45.
The Tigers scored in seven plays. The Jacket defense had stiffened when Metter reached the Jeff Davis five, forcing the Tigers to attempt a field goal. But the JD defense jumped off sides, giving the Tigers a first down at the four, and Metter scored on the next play.
The P.A.T. kick made it 7-0.
After the kickoff, the Jackets moved from their own 42 to the Metter 35, thanks primarily to a 15-yd. keeper by quarterback Britt Metts. But on 4th-and-3 from the 28, Aahiyus Allen came up inches short of the first down and Metter took over just outside their 25.
On the Jackets’ next possession, they drove from their 32 to Metters’ 32. Allen had a tackle breaking run for a 13-yd. pickup on the first play of the drive. A penalty moved the ball to the Metter 42. But on 4th-and-1, the Jackets couldn’t get the first down.
Metter then ran off the remainder of the first half clock, driving deep into Jacket territory, and the teams went to the locker rooms with Metter leading 7-0.
Metter kept shooting itself in the foot after taking the second half kickoff as they twice had to overcome penalties to move from their 38 to the Jacket 10. The Jackets had them stopped once but a pass interference penalty gave Metter new life. They scored from the 10 but yet another penalty nullified the score and forced them back. On 2nd-and-goal from the 18, the Tigers tried a pass over the middle but Michael Dotson picked off the aerial at the six, raced to the right sidelines and with an escort of downfield blockers, raced 94 yards to put the Jackets on the scoreboard. While the extra point attempt was thwarted by a high snap, Jeff Davis wasn’t finished.
Audiel Placencia’s ensuing kickoff appeared headed for the end zone but it hit at the one and backed up, forcing a Tiger returner to pick up the ball at the two. By then, the members of the kickoff team were closing in on him and he was brought down by a host of Jackets at the Metter eight.
While Metter quickly picked up a first down at the 18, the JD defense held and Metter was forced to punt from their own 15 and a short punt let the Jackets take over at the Tiger 39.
But two plays later, Metter picked off a long pass and took over at their own six, still in a hole.
Again the JD defense held, and Metter punted from their own 12 early in the fourth quarter. The punt rolled dead at the Metter 48.
From there, Jashaun Kirby got seven and two, Allen then darted 18 to the Tiger 21. After Kirby picked up 11 up the middle, the Jackets had a 1st-and-goal from just inside the 10.
Allen then went up the middle for four and on the next play, Metts faked a handoff to Kirby up the middle and the entire Tiger defense rushed toward Kirby. Metts then trotted into the end zone around the left side so wide open he could have walked the six yards to paydirt.
The Jackets tried for a 2-pt. conversion but a Metts pass fell just out of the reach of a wide-open Bradley Owens.
But the Jackets led 12-7.
Metter then drove 59 yards for the winning score with most of the yardage coming on a 27-yd. flea flicker play on 3rd-and-12 from midfield. Metter scored five plays later on a 10-yd. pass to move them in front 13-12. The 2-pt. conversion moved the score to 15-12.
The Jackets started their final possession at their own 25, moving to a first down at the 40. But after an 8-yd. pass made it 2nd-and-2 at the 48, the Jackets couldn’t move the chains in three more tries.
Metter took over on downs at the 47 and knelt on the ball two times to run out the clock.
Score by quarters:
JDHS 0 0 6 6 -12
MHS 7 0 0 8 -15