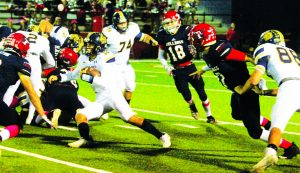 Britt Metts is surrounded by Bulldogs 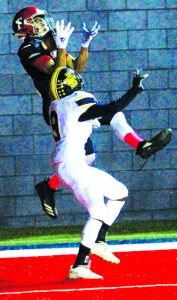 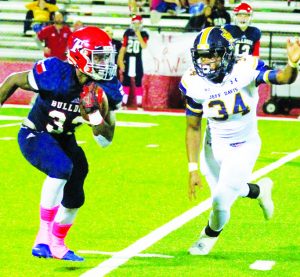 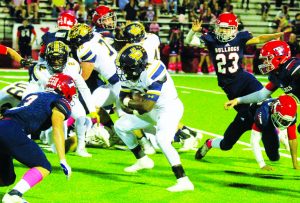 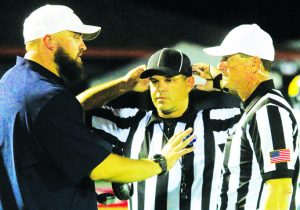 After getting off to a 6-0 2019 season, the JDHS Yellow Jackets have dropped two games in a row, the latest a 31-0 defeat at the hands of the Toombs County Bulldogs Friday night in Toombs’ newly remodeled stadium in Lyons.
The artificial turf and extensive renovations in the stands created quite a venue for the game but the Jackets couldn’t get many breaks as the Bulldogs shut out the Jackets for the first time this season.
The loss left Jeff Davis with their backs to the wall for post-season play as they now must either defeat region-leading Swainsboro this Friday night in Hazlehurst or down a much improved Metter Tiger team in the final game of the season Nov. 8 in Metter to extend their season.
The Jackets had the upper hand in the early minutes of the game Friday as they ground out a couple of first downs while the Bulldogs went backwards on their first possession.
But then things turned around. On their second possession of the game, Toombs completed a 40-yd. pass play that moved the ball to the JD 30 yard line and a 15-yd. penalty tacked on put the ball at the Jacket 15. But they could get no closer than the six where, on 4th-and-1, Austin Wood blew through the line to nail a Bulldog runner for a 4-yd. loss and the Jackets took over at their own 10.
On the next play, Britt Metts hit Wood for an 11-yd. gain but a fumble gave the ball back to the Bulldogs at the Jeff Davis 21.
The Jacket defense stiffened after Toombs moved the ball to the 10 with 1st-and-goal. And on 4th-and-goal from the one, a Bulldog pass was completed in the end zone for the first score of the game. The kick made it 7-0.
After the kickoff sailed into the end zone, the Jackets moved the ball from their 20 out to the 40, thanks primarily to a shovel pass from Metts to Jashaun Kirby good for 14 yards. But a holding penalty and a quarterback sack stopped the Jackets and Cade Walters had to kick the ball away. The low punt was partially blocked by a Bulldog player and Toombs was in business at the Jeff Davis 32.
The Bulldogs scored quickly as a 29-yd. run up the middle moved the ball to the three and, two plays later, a 2-yd. run was good for the score. The P.A.T. kick upped the score to 14-0.
Following another kickoff into the end zone, Greg Chambers rolled 35 yards on a reverse and a 15-yd. penalty pushed the ball to the Toombs 30. A pass interference penalty on the next play gave the Jackets a 1-and-10 at the 15. After Aahiyus Allen moved the ball to the 10 on two runs, and an incomplete pass in the end zone left the Jackets facing a 4th-and-4. A low snap on the next play resulted in a 10-yd. sack and the Bulldogs took over at the 20.
The hosts ran out the clock from there as the teams left the field for halftime with Toombs up 14-0.
Audiel Placencia’s second half kickoff went into the end zone but a penalty forced him to kick again and Toombs started from their 26. From there, the Bulldogs put together an 18-play, time consuming drive, overcoming three penalties in the process and getting a big 15-yd. flag against the Jackets that set up their next score. They scored on a 10-yd. pass into the corner of the end zone to push their lead to 21-0. The Jacket defense gave up ground grudgingly during the drive but they couldn’t keep the Bulldogs out of the end zone.
On the second play after the kickoff, Metts hit Chambers with a short pass and Chambers slipped a tackle and raced 22 yards to the JD 42. But the Jackets couldn’t move the chains and Walters punted the ball away.
On the first play after the punt, Allen came in to nail a Toombs runner for a yard loss. But a pass in the flats and some nifty running by the receiver quickly moved Toombs into Jacket territory. Five plays later, the Bulldogs scored on a 16-yd. pass and a 28-0 lead early in the final quarter.
After the kickoff, the Jackets went to the airways as Metts completed 3-of-5 passes, including a 12-yd. pass to Michael Dotson and a 7-yd. completion to Tyson Alls. But the drive fizzled and on 4th down Allen could get nothing and Toombs took over on downs at the Jacket 46.
Toombs marched down to inside the one yard line where, on 3rd-and-inches, the Jacket defense put up a stone wall and stopped the score, forcing Toombs to settled for an 18-yd. field goal to make it 31-0 with less than two minutes left to play.
A 7-yd. run and a 5-yd. run by Kirby were the only offense the Jackets could muster on their final possession of the game.
JDHS 0 0 0 0 – 0
TCHS 0 14 7 10 -31