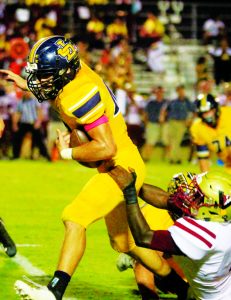 Austin Wood tries to pull out of a tackle 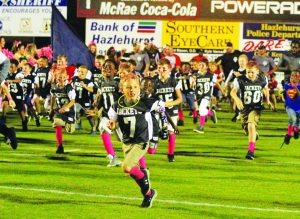 Youngsters enjoyed running onto the field for rec night 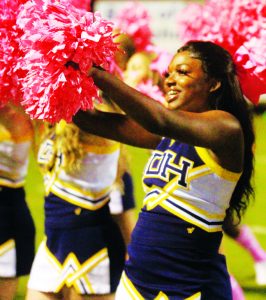 Dalathia Black cheers for the Jackets 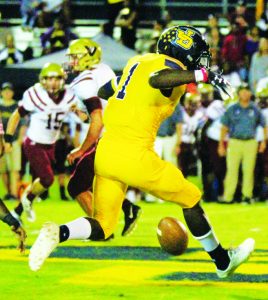 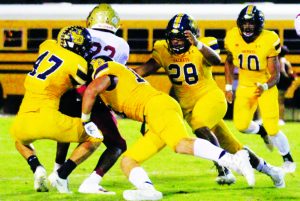 The Jackets bring down a Vidalia runner

Vidalia sophomore quarterback Bryce Davis shocked Jeff Davis High on the second play of Friday’s Region 2-AA matchup by racing 75 yards untouched through the middle of the Yellow Jacket defense for a 6-0 Vidalia lead.
And Davis didn’t stop there. He ran for three more touchdowns and threw for another to lead the visiting Indians to a 35-17 win over the previously unbeaten Yellow Jackets. Vidalia improved to 5-1 with the win and JD dropped to 6-1.
But Davis wasn’t the only player to frustrate the Jackets as the Indian defense held the usually powerful Jeff Davis running game in check for most of the evening. Additionally, a fumble and critical penalties served to further thwart the Jacket offense.
Starting at their own 21 after the Jackets kicked off to start the game, Vidalia ran a 4-yd. dive play to the 25. Then Davis took a shotgun snap, and followed a “student-body-right” mass of blockers to his right, cutting up field through an opening and racing 75 yards to paydirt. A bad snap foiled the extra point attempt as Vidalia led 6-0 before the crowd was fully settled into their seats.
On the ensuing kickoff, Austin Wood signaled for a fair catch but the ball sailed over his head, hitting at Greg Chambers’ feet. As he scrambled to pick up the pigskin the Indians swarmed him and he was pushed back to the 10 yard line, to further rattle the Jackets.
While the offense then showed some life, moving the ball out to the 46, thanks primarily to an 8-yd. run by Wood and 17-yd. and 7-yd. scampers by Aahiyus Allen, they had to punt the ball away on 4th-and-3.
On the first play after the punt, an Indian running back raced up the middle for 57 yards before being hauled down from behind by Cedric King. But on the very next play, Davis covered the final 25 yards, this time around his left side and without being touched until Cade Walters caught up with him at the two pulling him down as he fell across the goal line. The try for a 2-pt. conversion pass failed as defensive end James Wood pulled Davis down as he tried to pass.
The first critical penalty against the Jackets came on their next possession as quarterback Britt Metts hit Chambers for a 19-yd. completion and an apparent first down in Vidalia territory. But an illegal use of the hands penalty nullified the play.
Later, after a Vidalia punt went off the side of the kicker’s foot, the Jackets appeared to have the ball at the Indian 32. But a personal foul penalty moved the ball out to the 48.
From there, Bradley Owens raced around the left side for runs of 22 and 16 yards, putting the ball at the Vidalia 10 with a 1st-and-goal. But on the next play, a flag flew three yards in the Jacket backfield as Allen took the ball to the eight. The 15-yd. penalty pushed the Jackets all the way back to the 26. An 8-yd. pass to Michael Dotson and a pair of incomplete passes brought Audiel Placencia onto the field to boot a 37-yd. field goal to cut the Indians’ lead to 12-3.
On the first play after the kickoff, Davis did it again, this time rushing 69 yards up the middle of the field and going untouched until Dotson nipped at his heels as he got inside the five. Davis carried for the 2-pt. conversion to put the visitors up 20-3 late in the first quarter.
In the first quarter, Davis had 169 yards rushing on his TD runs alone.
On the second play of the second quarter, Metts hit Walters on a slant-in at the JD 40 and Walters raced to the Vidalia 45. After a 3-yd. Austin Wood run, Metts connected with Chambers for a 13-yd. completion to the Vidalia 30. Wood then carried to the Vidalia 22 as the Jackets threatened to score again. But a fumble on the next play gave Vidalia the ball at their own 15 as JD was thwarted again.
On their next possession, the JD offense again showed some life, moving the ball from their own 35 to the Indian 29. But they could get no further and turned over the ball on downs. A penalty backed up Vidalia to their 17 and they marched 83 yards in four plays scoring on a 36-yd. pass. The 2-pt. conversion was good and the Indians led 28-3 at halftime.
The Jackets took the second half kickoff but couldn’t move the chains and Walters’ punt was returned to the Jacket 40. It took the Indians four plays to score with Davis covering the final distance in runs of 34 and two yards. The P.A.T. kick upped the tally to 35-3.
Vidalia punted the ball to the Jackets on the first play of the fourth quarter. On the first play after the punt, starting at the Jacket seven, Metts hit Allen over the middle at the 19 and Allen outran everyone to the end zone for a 93-yd. touchdown pass. Placencia’s kick made it 35-10.
The Jackets’ final score of the game came as Metts lofted a long pass down the right sidelines to Chambers who had gotten behind the Indian secondary. Chambers took the ball in at the 16 and raced into the end zone to complete a 56-yd. touchdown pass play. Placencia kicked the extra point to make it 35-17.
Davis rushed for 252 yards and four touchdowns on 12 carries and threw a 36-yard TD pass.
Score by quarters:
VHS 20 8 7 0 -35
JDHS 0 3 0 14 -17