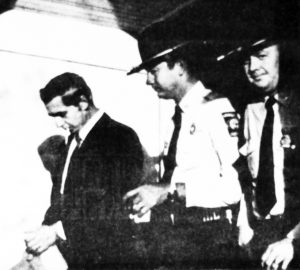 Junior Pierce leaves the courthouse in this 1972 photo

By TOMMY PURSER
The gray-headed, balding man stares at the camera, eyebrows arched high as if to hold up the sagging bags under his slightly squinting eyes — squinting, it appears, to better see the camera with his failing eyesight.
His posture is a bit stoop shouldered, listing slightly to his right, pulling his unbuttoned prison jacket open to the right also, revealing the collar of his prison-issued shirt.
His lips are parted as in an effort to breathe more easily.
At 88 years of age, he is a sad-looking old man. But any person knowing the epitome of evil he was as a younger man can conjure up little sympathy for the aged man blankly staring at the camera for his Department of Corrections photo.
For young residents of Jeff Davis County, the name William J. Pierce Jr. probably isn’t recognizable.
But for older residents Pierce is well known for being perhaps the most infamous murderer every convicted in Jeff Davis County. And Inside Detective magazine, in 1971, called Pierce “one of the most cold-blooded mass murderers in the annals of Southern Crime . . . .”
Pierce was a serial killer who, today, is still serving time with the Georgia Department of Corrections at the Georgia Diagnostic Class Prison in Jackson, 48 years after being found guilty of murders in Jeff Davis, Appling, Toombs and Treutlen counties.
On March 19, 1971, a Jeff Davis County grand jury indicted Pierce, a 39-year-old Emanuel County man, for the murder of Mrs. Homer (Helen) Hutcheson Wilcox whose body was found earlier that month after she disappeared from her country store on the Snipesville Highway Jan. 22, 1971.
The indictment was one of several murder charges against Pierce, an ex-convict who had been paroled in May, 1970.
He was also indicted for the murders of Mrs. Vivian Sutton Miles, 60, who was shot to death during a robbery at her store near Baxley Jan. 28, 1971, and Mrs. Lacy Thigpen, 51, of Treutlen County who was shot at her store near Soperton Jan. 12, 1971.
The first case for which Pierce was found guilty was the death of Mrs. Miles. The trial was held in Wayne County after a judge approved a change of venue motion to move the trial out of Appling County.
Then-Jeff Davis Sheriff Mark Hall told the Ledger that Pierce led him and other investigators to the body of Mrs. Wilcox, who was the second of the three known January, 1971, murders.
Sheriff Hall said that Pierce told investigators he was looking for places to rob and drove through Roper and Snipesville before finding Mrs. Wilcox’s store which was isolated enough to rob.
In the death of Mrs. Miles in Appling County, a bread deliveryman surprised Pierce at the store and was shot at twice by Pierce but escaped uninjured. He made a positive identification of Pierce after Pierce’s March 5, 1971, arrest in Emanuel County for parole violation.
A Toombs County Grand Jury later indicted Pierce for the Dec. 20, 1970, murder of Joe M. Fletcher, 59, a Vidalia service station operator.
The Sheriff of Sumter County, S.C., signed a warrant accusing Pierce of killing 13-year-old Margaret (Peg) Cuttino, daughter of South Carolina State Representative James Cuttino of Sumter.
Pierce was also a suspect in the slaying of Kathy Jo Anderson, 17, of Lexington, S.C. whose body was found Feb. 17, 1971, in a shallow grave near Edmund, S.C.
Additionally, Pierce was indicted for the murder of 19-year-old Ann Goodwin of North Augusta, S.C., who was fatally shot July 14, 1970, while babysitting.
By June, two other murder indictments sprang up, for the deaths of Virginia Main, 20, in Gastonia, N.C., in July, 1970, and James Sires, 40, in Beaufort, S.C., in August, 1970.
Eventually Pierce was indicted for the murders of nine people, was the chief suspect in a half dozen other slayings and was indicted in connection with two other armed robberies — in Sylvania and Statesboro — and the beating of a service station operator in Sylvania.
In the Miles murder in Appling County, Pierce had hit Mrs. Miles’ young granddaughter on the head and left her for dead, but she recovered.
Homer Wilcox, now deceased, told a reporter in 1971 that he remembered Pierce coming into his wife’s store while he was a member of a prison road crew, about two months before he was paroled.
“He wanted some cigarettes and I gave them to him,” he said. “I wouldn’t take his money. I said, ‘No sir, I want to give this to you.’ I gave him a dollar out of the cash register and told him, ‘I know this ain’t much.’ I told him to stop back when he got out if he needed anything.”
“He stopped back …,” Wilcox said, his voice breaking.
Upon his parole in May, 1970, Pierce had been serving a 10-20 year prison sentence for arson, burglary, attempted escape and receiving stolen goods. He was released by the State Parole Board, reportedly on a 2-1 vote, despite a prison psychologist describing him as “dangerous” because of an “unstable personality.” Psychologists had warned that Pierce was possibly sociopathic and should be considered dangerous.
While he behaved himself for six months after his release, he was unable to hold onto the various jobs he tried during that time, he eventually became unemployed. And in need of money.
He found isolated country stores to be easy targets. And he meant to leave no witnesses.
During his trials in Jesup and Hazlehurst, he proclaimed he was innocent and the confessions he had given were coerced by investigators.
But four juries were not convinced by Pierce’s claims and found him guilty of murder. With four life sentences to serve, prosecutors involved with the other murders chose not to seek additional convictions.
While Pierce has outlived the sheriffs and many of the investigators who worked his cases almost five decades ago, he hasn’t seen freedom in 48 years and will likely die an imprisoned man.