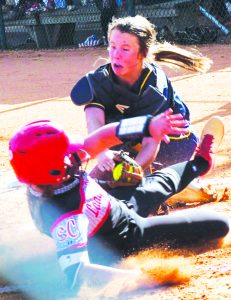 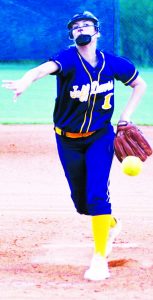 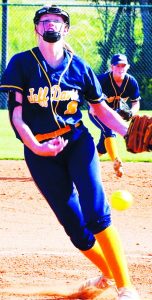 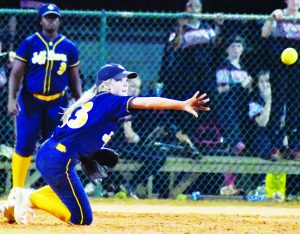 Jeff Davis High easily downed Screven County 9-1, 8-0 last week in Sylvania in the opening round of the 2019 GHSA State Tournament.
The Lady Jackets host Monticello today (Wednesday) — weather permitting — in the second round. If rain forces a cancellation, the three-game series will begin Thursday. Game times are 4 and 6 p.m. the first day and 5 p.m. for the “if” game.
In last week’s first game, the Lady Jackets’ 10-hit attack was spread throughout the lineup as eight different batters had base hits.
After two scoreless innings, JD got on the board as Paige Carter singled, Dee Wooten was intentionally walked and Annalese Poole singled to score Carter and move Wooten to third. Wooten scored on a passed ball to put Jeff Davis up 2-0.
In the fourth, the Lady Jackets blew the game open with a 5-run outburst. Karlie Watson singled and scored on a Jakhia Greene double. With two outs, Carter was hit by a pitch, Wooten was intentionally walked to load the bases and Poole drew a walk to make it 4-0. Carter then scored on a passed ball and Georgia Roberts followed with a 2-run single to up the tally to 7-0.
In the fifth, Wooten was intentionally walked with the bases loaded to make it 8-0.
In the sixth, Roberts was hit by a pitch, went to third on a Bianca Torres single and scored on a sacrifice fly by Allie Lytle for the Lady Jackets’ final run.
Carter and Jakhia Greene both had a single and a double with Greene getting an RBI. Poole, Roberts, Torres, Lytle, Watson and Maeleigh Burns all had singles. Poole and Roberts had a pair of RBIs, and Wooten and Lytle each drove in a run. Watson and Lytle both had sacrifices and the Lady Jackets ran the bases with abandon, stealing five bases.
Wooten was intentionally walked all four times she came to bat. She scored twice and drove in a run on a bases-loaded walk.
Kelsey Parlor was the winning pitcher, going the distance on the mound. She gave up one run on five hits, walked one, hit two and struck out five.
In the second game, Kesleigh Poe dominated the Lady Gamecocks on the mound, giving up a trio of harmless hits, walking two and striking out one.
The Lady Jackets scored three times in the first and added five in the fourth to win in five innings.
Fefe Greene and Carter led off the bottom of the first with singles but Greene was thrown out trying to advance to third. Wooten was intentionally walked and Poole walked to load the bases. With two outs, Watson popped up but was safe on an error to make it 1-0. Lytle then hit a hard grounder to shortstop and reached on an error to score pinch runner Brianna Schroeder and Roberts who had reached on a fielder’s choice.
In the fifth, the Greenes hit back-to-back singles and Carter reached on an error to score Jakhia Greene. Wooten was intentionally walked to load the bases. Roberts then grounded into a fielder’s choice as Fefe Greene beat the throw to the plate. Carter scored on an error and Watson came to the plate with runners on second and third. She singled to drive in the final two runs.
After being held hitless in the first game, Fefe Greene led the offense with a trio of singles and three stolen bases. Watson had two singles and two RBI, and Carter, Lytle and Jakhia Greene each singled.
Wooten was intentionally walked all three times she came to the plate and scored two runs.
Score by innings:
JDHS 0 0 2 5 1 1 -9
SCHS 0 0 0 0 1 0 -1